This is the second anthology I have read from Dark Chapter Press. I know David Basnet had a lot of input into this one from an editing point of view so I was intrigued to find out how that worked out for him. Plus, I make no secret that I think Dark Chapter Press are going to be a force to be reckoned with in the next few years. They put their heart and soul into the books they produce and it shows.

Eight Deadly Kisses also has two other great things going for it.

Number One is the fact that it was released as part of Woman in Horror month so all of the contributors are, you guessed it, women!

The second thing is that this book is Dark Chapter Press’s first foray into the world of charity.

Dark Chapter Press and the writers gathered in this anthology have committed to supporting CAMFED, a charity providing education for girls and young women in Africa, to build brighter futures and to encourage the development of female leaders. All money received by Dark Chapter Press from sales of Eight Deadly Kisses will be donated to CAMFED.

So how did this bunch of ladies do then? Let’s find out!

NIGHT TERRORS BY AUDREY E.L. COOTS
Anias has night terrors. They are so bad she is totally paralysed and hears voices and feels someone touching her. Her roommate Amily uses her psychology training to try and convince Anias it’s all in her mind.

It’s not though. Amily should have listened.

Now this is how you open an anthology. This was a very relaxed and to the point short story that left no room for confusion or doubt. It is very creepy because when the terrors hit, Anias cannot move a muscle and cannot prevent certain things from happening to her.

The way this is written is very effective in putting you into the situation yourself and feeling the fear. You will hold your breath during these scenes.

A good twist at the end makes this a good opener.

SOUL SEEKERS BY ALICE J BLACK
Soul Seekers is not a dating agency nor a psychic service. Peyton and Olivia run it and they hunt ghosts.

The business is just taking off when they are called in to investigate some nasty goings on at a bed and breakfast. Peyton thinks she is out of her depth on this case but maybe it’s time for Soul Seekers to take on the big boys.

Think Poltergeist from the perspective of the ghost hunters and that’s what you have here. I really enjoyed this one. To be honest maybe the writing could be a little more polished but the potential is definitely there.

I could see this developing into a very successful series of stories for Ms Black. She has the ideas and the undoubted talent for writing. Just needs a bit more oomph for me to lead it more to the darker side and make it scarier.

THE DEAD SEASON BY FIONA DODWELL
Chloe hasn’t had the best of records on the dating front. When she comes across an advert for Soul Match, she seems to be convinced they are the company to finally find her the match she craves. When they set her up on her first date, she begins to wish she had stayed at home.

Brilliant. Just brilliant. This is a deeply dark tale that is told so convincingly well that you will believe everything about it and if you are in the dating scene, you will stop.

Fiona Dodwell has a very nice, free flowing writing style that is uncomplicated but not overly simple. It drags you in and keeps you hooked until you can’t stop reading. Remember to breathe.

MARION BY ERICA CHIN
A lady wakens in the middle of a field. She has no idea who she is or where she is but hears the name Marion. Soon after, she is rescued by George, who appears to know her, also as Marion.

That’s all I can give you without spoilers. I was really enjoying this one and then it ended. A little prematurely for me. Yeah I know it’s a short story but sometimes they need to be padded out a little bit so they don’t feel rushed in the end.

COMMUTING BY VERONICA SMITH
Tamar is on her daily commute home when someone breaks into her car at an intersection. Facing a madman with a gun, she has no choice but to drive and hope someone rescues her.

Bobby is behind her and sees everything. Will he be able to come to the rescue?

Another cracking story. This to me is more of a thriller but is horrific in the fact that this is all mental torture. Tamar is in turmoil, trying to figure a way out of things when there seems to be no hope and you do get a true picture of the fear in her head.

This has a wicked twist at the end as well just when you think you have it sussed.

THE BLACK CAT BY SHARON L. HIGA
Aissa lives in Morocco with her native born mother and French father. He is in the Navy and spends his time battling against pirates on the high seas.

Aissa is kidnapped by the same pirates and faces a struggle just to survive but also to escape.

Hmmm not sure on this one. I could see what was intended and the idea behind the story. It just didn’t do it for me in the execution. It felt as though it was rushed and put together with a few things missing.

A shame, because up to a point I was really enjoying it and the potential it had.

LATE LUNCH BY C A VIRUET
Kris and Alicia are meeting for lunch. They enjoy these days where they can totally relax and enjoy each other’s company.

They try the Vassal Bar and Grill. Somewhere new. Somewhere intriguing. Somewhere they should have avoided.

Loved it, loved it, loved it. Dark and mysterious, this is a story that just keeps building and building the tension and the hatred and the horror right up to an explosive ending that will leave you thinking wow!

PRICK BY D A CHANEY
Mara works in a bookstore. When Jake approaches her for help one day, she thinks he is ok, even possible boyfriend material. When Jake starts to turn up in places he shouldn’t, Mara gets worried that he is not all he is making out to be.

This is a really good one to close the book. Again, this is all mental torture and horror. It’s a story about how simple things like seeing someone where they are not supposed to be can mess with your head to the point where you think you are going mad.

An excellent psychological horror, again written in such a way that the tension is built perfectly and you can’t help but read from behind a cushion. 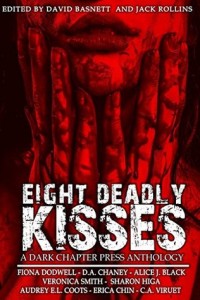 To summarise: So there you have it. Eight Deadly Kisses. Eight stories by eight different women for Women in Horror Month. Eight very different styles of stories that truly show the merits of an anthology like this.

I liked the fact that the only connection between the writers in this one was the fact they are female. That then left them open to write stories in completely different styles, which was really good. Sometimes I get a bit bored halfway through an anthology if the stories are all of the same theme. Not this one. Some of the stories could not be more different.

Dark Chapter Press have done it again in my opinion. If you want an anthology with vastly different stories that won’t take you a month to read then this is for you. All about the women and all very powerful stories in their own rite. Good stuff.

Plus, you will be giving something to charity when you buy!