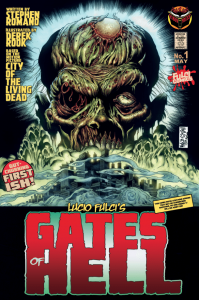 There’s been a lot of excitement among horror fans ever since Eibon Press announced their upcoming Lucio Fulci’s Gates of Hell comic. And rightly so; the Italian gore master’s 1980 film (more commonly known as City of the Living Dead) is a trippy, grue-filled gem that formed the first part of his Gates of Hell trilogy, which continued with the truly masterful The Beyond, and wound up with 1981’s The House by the Cemetery.

While issue 1 is still a little way off, Eibon has officially unveiled their ‘Eibon Sleeve’ variant cover art, and it’s stunning. An epic take on the film’s classic original poster, the cover was created by celebrated artists Kyle Hotz and Jason Moore, who between them have worked on issues of Evil Ernie, Doctor Strange, Ghost Rider 2099, Batman: Haunted Gotham and many more. 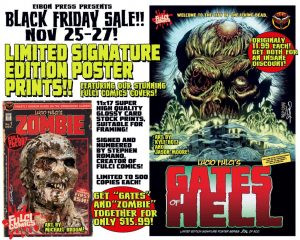 Gates of Hell follows Eibon’s Lucio Fulci’s Zombie series, which was based on the director’s 1979 classic Zombie Flesh Eaters. Over at eibonpress.com you can pick up reduced-price, limited edition prints of the covers for both series’ 1st issues all weekend in their Black Friday sale.