Eerie New Poster for The Conjuring 2 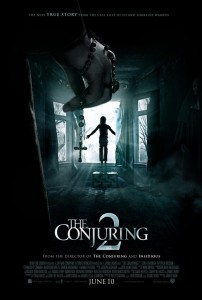 A dark and eerie new poster has been released for The Conjuring 2 which has a very spooky entity lurking in the shadows, if you can strain your eyes hard enough to see. Keeping to the tone of the previous posters and video footage that we’ve seen, the film has a strong religious angle and it can, again, be seen in the image of the rosary beads and the crucified stance of the girl on the edge of the window sill. Or is she levitating?

The anticipated sequel to The Conjuring will follow Ed and Lorraine Warren once again as they head to Enfield, London, to investigate a supposed haunting. The film is based on the real-life case files of the ghost-hunters and will begin with the infamous Amityville horror haunting, before settling on the Enfield poltergeist events.