It has been over 16 years since the ground-breaking found footage flick The Blair Witch Project hit our screens and a new sequel is on the way. Director Adam Wingard is at the helm of the new Blair Witch with his frequent collaborator Simon Barrett on-board as the screenwriter. The directors of the original film Eduardo Sanchez and Daniel Myrick are executive producers and that heightens our faith in Wingard’s witchy tale.

But, what do the original directors think of this new addition to their franchise? Eduardo Sanchez said the following when he was a guest on the podcast Found Footage Files, and it’s mighty promising:

“It’s just full-blast Blair Witch. It’s really creepy and the last third is just crazy. It’s just all over the place. It just does not let you go, you know? I’m really happy to have been a part of it… it kind of progresses the found footage genre a little bit which I think is really cool. … 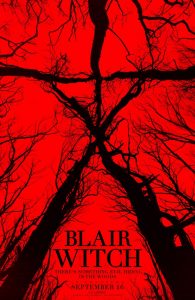 It’s really, really well grounded in the original. And I think that the fans of the original will get a lot out of it. It’s kind of a recognizable…it’s almost like you’ve been, like kind of a deja vu, but then it turns into just a — like I said, it kinda takes our film and blows the doors off and goes nuts with it, in a really really good way.”

So, there we have it. It has the original director’s stamp of approval and it’s already been getting a lot of fantastic buzz. Is it safe to say that it’s a hit? We would say so. Do look out for our review soon and be sure to catch Blair Witch when it haunts cinemas on 15th September in the UK and on 16th September in the USA.