The first instalment of Bryan Roberts’ Ed Savage series took me by surprise. It was a mammoth tome which combined elements of various genres to create something of a unpredictable smorgasbord; the type of novel that feels like a truly vivid imagination finally unloading and spilling its influences all over the page. But it actually worked – blending the horror, thriller, and disaster genres to great effect – and my biggest takeaway was just how damn fun it was. The sequel doesn’t disappoint either.

In this latest entry to the saga is more of the same albeit in a brand new caper. Our titular hero gets into some bother when he becomes embroiled in government conspiracy and gets on the wrong side of an evil doctor. Throw in scandals, family drama, a haunted sanitarium, and more, and what you have is another adventure befitting of a series that came out the gate swinging in terms of sheer bewilderment and scope. Just roll with it, and you’ll have a great time. 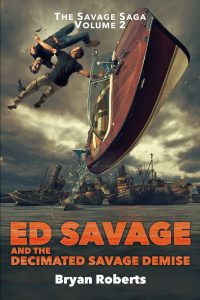 Once again, the novel is quite meaty and can’t be read in a single sitting. That said, like the previous book, Roberts makes sure to pack every page with an engaging story and retains his cunning ability to end most chapters on an almighty cliffhanger. It’s an another ambitious work, but this is the type of ambition that can take a career to the moon and back. And maybe someday we’ll get to visit space with Ed Savage.

Roberts has created a protagonist who you could thrust into any situation and craft a story around. If you like your storytelling with a healthy dashing of pulp then be sure to add this one to your reading list.