Synopsis:
A small group meet in a supposedly haunted house to learn what triggered the supernatural terror. 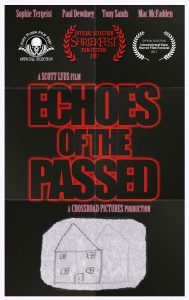 Directed by Scott Lyus, Echoes of the Passed is a macabre little treat that brims with suspense, intrigue and a generous helping of subtle wit. Rather than relying on full-blown, obvious scares, this 20-minute short uses a carefully constructed spooky atmosphere and an over-arching sense of mystery to deliver something very eerie.

Echoes of the Passed is a minimalist exercise in slow-burn horror. The film is claustrophobic – which works well in its favour – setting the majority of the runtime in a singular room. Back-and-forth conversation begins to expose the secrets of the haunted house as those involved learn the horrifying truth of what happened years before. It certainly won’t be for everyone, especially those that desire a little more energy from their horror films, but those who are impressed by sharp dialogue and self-aware wit will find a lot to admire in this supernatural whodunit.

Told almost in the form of a monologue, the film ends on a surprising revelation that will chill and surprise, thanks to the accompaniment of a soundtrack that gently grows with intensity as the truth is uncovered. Rather than ending with a bang, it almost withers to a close and leaves the audience to ponder what they’ve just seen. In this way it feels as though the film’s come full circle, cementing that air of mystery without truly developing the story any further. It almost manages to place a neat bow on top of a film that is without loose ends, but there is something about the eventually abrupt ending that may leave you wanting more.

Many short films suffer from that built-in problem that stems from the small amount of time you’ll spend with its tale and Echoes of the Passed is no different. You’ll be left to wonder what could have been if Echoes of the Passed had a bigger budget, a stronger cast and more time to delve into its haunting story. Wanting to see more is bittersweet, showing that we’re keen for more, but unsatisfied with what we we’ve been given. 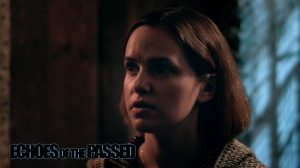 Although you won’t be stunned by Echoes of the Passed, there is still an interesting story to be told. It’s eerie and unnerving, plus it’s easy to appreciate the tautness of the storyline and the streamlined direction that ensures the film never strays from its path.