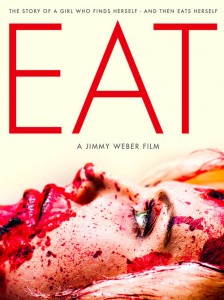 Synopsis:
A young actress in Los Angeles struggles to make ends meet. When a failing career, an unstable best friend and mounting debt begin to overwhelm her she finds herself in a gnarly and repulsive predicament where a small nervous habit of chewing nails breaks out into an insatiable appetite for flesh – her own flesh.

I imagine that EAT began as a whole lot of gruesome ideas that could have easily transpired into a short film. The nasty little treasures that this movie beholds are the stuff of nightmares. You know, those devilish thoughts that cross your mind in times of boredom. You might be sitting in a waiting room twiddling your thumbs and picking at a hangnail, or lifting the edges of a not-quite-healed scab just enough to see into the pulpy wound. Something tells me that director Jim Weber’s brain was pulsing with such thoughts and he did what any respectable horror filmmaker would do – he put them into a movie.

EAT tells the story of Novella McClure, a struggling actress with a nervous habit of biting her nails. When the stresses of her life become overbearing her condition quickly turns into a compulsion, which spirals into a revolting lust, and the taste of her own flesh becomes an irresistible vice. Before long Novella is eating herself to the bone while trying to juggle a love life, a career and every other shitty deal that life throws at her. The result is a strangely appealing film that is as quirky and upbeat as it is depraved and repugnant.
Director Jim Weber has pooled his twisted and demented ideas into a decadent cache of depravity, and he has woven Novella’s story amongst it all. There is definitely a sense that everything between the gore is a means to more gore, however, the characters are interesting and likable enough that a surprising amount of charm begins to seep out. Maggie Maddock is the lead actress and aside from a string of bit-parts and short films this is her first leading role. She handles the material very nicely and understands the careful balance between the horror, the comedy and the drama. In addition, while none of the characters are fully developed, they interact naturally and help to solidify what is otherwise a stupid and gratuitous story.
The film was made by an American collective known as PRETTY PEOPLE PICTURES. Up until now they have made several short films and EAT is their first feature. It was made on a shoe-string budget with a clear comprehension of the craft, as well as the genre. All of the typical low-budget, indie vulnerabilities are avoided with skilful and controlled cinematography and effective set design. Aside from a few cheap props the film looks fantastic. Some of the editing during the film’s more challenging scenes is slightly irritating, but not so much as to ruin the frivolity. The music is also impressive with an electronic trip-hop sensibility. The score is layered evenly throughout and effectively masks any audio imperfections that most low budget films inevitably have. It’s so refreshing when people make the most of what they’ve got and rely on the strength and talent of a team to produce good work. To the average unsuspecting movie-goer EAT will probably be perverse and inexcusable. But to astute genre fans and gore-fiends who are lucky enough, it might just reach down their throats and gleefully tickle their gag reflex.