Jacob Hair, the concept artist for Insidious: The Last Key has shared the early concept art for the film’s new demon: Key Face. You’ll notice that Key Face’s fingers aren’t keys in this early image, but other than that, it looks pretty accurate to the final design in the film. From what we’ve seen so far, anyway. 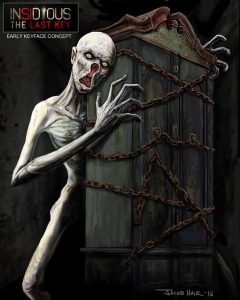 When speaking about the concept art, Hair said:
“[This concept art] was done super early on to help sell them on Adam’s take on the movie. It was inspired by some leprosy reference Adam had. [Adam] and I relayed a bunch of ideas that ranged from far-out and fantastic to very grounded and real. This direction seemed to split the difference nicely.”

In The Last Key, the parapsychologist Elise (Lin Shaye) is taken back to her roots as she investigates paranormal activity in her family home. The trailer merges Elise’s past and present, inviting us to meet creepy demons that infected her past and helped craft the woman she is today. There are plenty of jump scares and spooky moments; hopefully we’ll be left with some unseen scary scenes when we see the film in the next few days.

Insidious: The Last Key further stars Leigh Whannell, Kirk Acevedo, Spencer Locke, Josh Stewart, Javier Botet and Hana Hayes. The film will be released on 12th January 2018 in the UK, so be ready to welcome in the new year with chills and insidious spills.