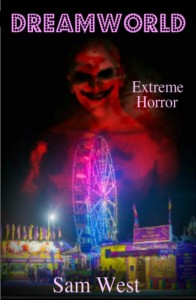 Sam West’s Dreamworld is another novella marketed as extreme horror and centres on a Halloween tour of an abandoned theme park. It’s Jim’s stag night, he only has one friend so his brothers bought a mate and the four of them embark on a pretty poor excuse for a man’s last night of freedom.

Instead of a strip club they end up at Dreamworld, with two women and a guide that appears different to all his guests. Dreamworld harbours a reputation of death, freak accidents and horror stories, setting the scene for what is too come. The guide is named Eric Flu, an anagram of the Prince of darkness and he infects his tour party in different ways.

Dreamworld contains the usual spelling mistakes of a poorly edited piece of short fiction, extreme horror has to make you cringe even sicken you but it really shouldn’t be incredulous. There were scenes that didn’t feel right, impossible even and bordered on ridiculous. You see it time and time again, and if it’s a story that’s 60 odd pages, can’t someone please, please reread it. Sort out the errors before putting it up for release and get a flawless story out no matter the quality.