THE DREAM-QUEST OF UNKNOWN KADATH 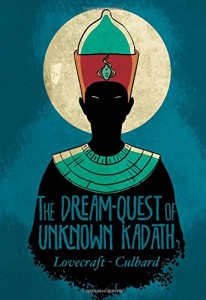 You have to hand it to I.N.J Culbard. Whether or not you’re a fan of his literary adaptations, nobody can accuse him of ever taking the easy way out. With The Dream-Quest of Unknown Kadath, a graphic novel based on a Lovecraft novella, Culbard creates a comic set almost entirely within the dreams of the central character, filled with obtuse references, bizarre monsters, and strange, illusory landscapes. It’s an interesting addition to Self Made Hero’s collection of nineteenth century retellings, but though often dizzying and impressive, Culbard’s adaptation fails to reach the heights of the original novella.

The story focuses on Randolph Carter, a quixotic author who becomes obsessed with travelling through his dreams to reach the mysterious city of Kadath, the home of the gods. The original story is one that contains a valid mythological perspective, exploring the dangers of escaping the physical world, and the importance of gaining an appreciation of one’s life. But Culbard’s retelling is a cartoon version of the story, faithfully adapting each scene but somehow neglecting the complexities so evident in Lovecraft’s prose. 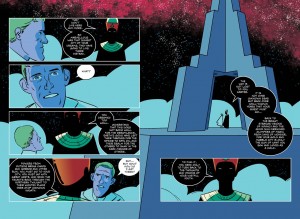 That’s not to say that Culbard’s version in not enjoyable. The artwork is both striking and illusive, artfully flitting between sequences that, as in a dream, shift and change as the narrative dictates. The landscapes especially – ranging from moonlit galleons, windblown deserts, and unwelcoming forests – are often breathtaking when rendered in Culbard’s inimitable style. Colours too are used skilfully throughout, giving each scene of the book a hallucinatory quality, as inviting as they are disturbing. 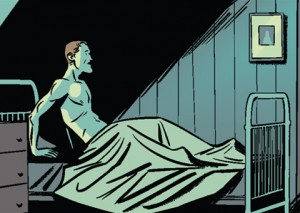 Ultimately, The Dream-Quest of Unknown Kadath is most successful when playing with the darker elements of Lovecraft’s story – such as the almost imperceptible faces of the gods, or the genuinely unnerving reference to the King in Yellow – but without Lovecraft’s prose, these moments are lost within a story not really suited to the graphic novel form. In fact, without reading the novella, I’m not convinced that a reader would really understand much of the story at all. Perhaps this is Culbard’s intention, to create something that actually possesses the quality of a dream, something vague and confusing, to be only half-remembered afterwards. It’s an interesting idea, but one that doesn’t entirely work.

Culbard is an enormously talented creator and I would definitely read more of his graphic novels, but I can’t help feeling that his literary adaptations are a waste of his extraordinary potential. Or maybe I’m being cynical. Perhaps I should follow in the footsteps of the protagonist, enjoying the dream for exactly what it is.