Synopsis:
A professional cyclist agrees to go on a biking exhibition in Chile, despite being plagued by the memories of his best friend’s death in a racing accident. Along with his girlfriend, he goes on a practice ride, but when they encounter a man with a virus and a group of killers, their trip turns into a fight for survival. 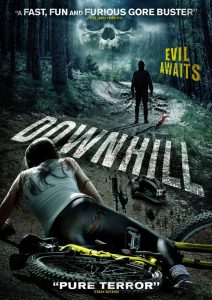 Downhill tries desperately hard not to be a carbon copy of those horror films that follow a couple of Americans in unknown territory and, occasionally, it succeeds. However, for the most part, it doesn’t quite manage to craft its own unique identity. The cycling basis for the film is an interesting one and begins as an effective device to set the events in motion, but there comes a point in the film where the bikes are rendered useless. It’s disappointing, because the beginning of the film implies the use of intense POV shots and fast-paced action that would make for fierce watching, but this is abandoned as soon as it is mostly required. After a promising beginning, Downhill becomes perilously dull when the cyclists encounter the man with the virus and his hunters. This should be the most exciting part of the film, but instead, it is when it becomes its most tiresome.

The film’s middle events cement it as a lacklustre journey, because it can’t grasp the levels of frenzy it requires to deliver the non-stop drama it attempts to present. The intensity doesn’t feel as credible as it could with horrendously edited fast-cutting and poor gun effects ruining most of the central action. Rather than heighten the feeling of adventure, it draws attention to the film’s attempts to disguise its low-budget with frantic effects in post-production. The characters don’t help the film’s feelings of authenticity, because as professional cyclists Joe (Bryce Draper) and Stephanie (Natalie Burn) manage to challenge the saying “it’s as easy as riding bike.” For them, it is obviously as easy as climbing Everest and the look of fear on their faces is at its most convincing when they’re bombing down steep tracks in the mountains. It’s a shame that they cannot convince us of the film’s central and essential aspect, but alas, cyclist-actors are probably hard to come by.

It may be hindered by budgetary restraints, but Downhill does excel when it edges towards its monstrous climax. Obviously inspired by Lovecraftian elements, the film begins to steer into a direction that leaves its predictability at the door. It becomes an interesting beast once again when poor Stephanie finds herself in the middle of a gross and sinister otherworldly plot. The lighting shifts from the brightness of the outdoors, to dark and foreboding with a splash of blue to create an alienating exterior that seeps with outlandish threat. Unfortunately, an impressive ending cannot save Downhill from mediocrity and the film’s previous tedious events are still fresh in the mind. Maybe if Downhill had lead and carried itself with these nightmarish and, quite honestly, shockingly entertaining events, rather than saved them for an astonishing finale, we may have enjoyed a more twisted ride with Downhill. 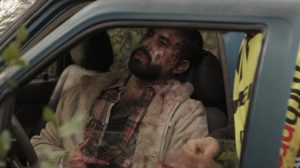 Unfortunately, despite its initial promise and effective Lovecraftian ending, Downhill can’t achieve memorability. Aside from a couple of icky, body-horror moments and lovely shots of the admittedly beautiful scenery, there is nothing truly stand-out in this average cat-and-mouse thriller.