The Doof Warrior to Return in Mad Max: The Wasteland

Following the release of the all-conquering action classic Mad Max: Fury Road in 2015, George Miller gave a lot of conflicting words on the possibility of further outings for the Road Warrior. It certainly seems as though the legendary director is still planning those sequels however and, talking to The Independent this week, he teased the return of one of Fury Road’s most colourful characters.

Discussing the proposed follow-ups to Fury Road, Miller confirmed that scripts have been completed, and very much sounds as though he is keen to return to the world he first took us to in 1979’s Mad Max.

“We dug down deep into the subtext, the backstory of all the characters, and indeed the world…and without really thinking about it, we wrote two other screenplays just as part of the bible of the stories,” Miller told the site. “Somewhere, if the planets align, there will be two other films.”

Discussing the first of the two films – tentatively titled Mad Max: The Wasteland – Miller confirmed the planned return of the flame-throwing, bungee-bound guitarist known as the Doof Warrior, saying: “If we get to make another movie, the Doof Warrior will be there! I know who his mother was. I know how it was that a man who is mute and blind survived the apocalypse. I know his story very well!” 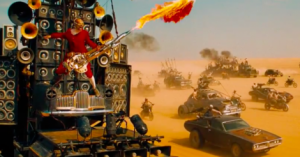 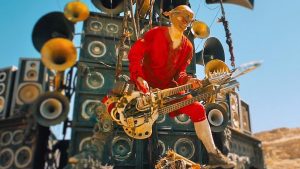 Fury Road set a high watermark for the rebooted franchise, and indeed action cinema in general, and the wait for further outings will be a tough one. But wait we must, with Miller saying that he has another, as yet untitled film he wants to make before heading to The Wasteland.