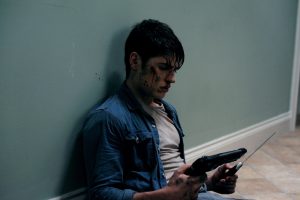 Synopsis:
A couple of teenagers get their kicks from prank calling strangers; telling them that they’re sick, that there’s an invader in their house or that their daughter is dead. The tables are turned when the pair prank the wrong guy and find out that their late night fun can have deadly consequences.

This is your classic tale of bad guys getting their comeuppance. Bad teenagers getting told off by grown-ups: “You bad kids, you can’t make prank calls to STRANGERS at NIGHT!” Bad things will surely happen, they’ll get their just desserts and they’ll learn not to do it again, because they’ll be DEAD. That’s this film in and a nutshell. However, for all its predictabilities and certainties, Don’t Hang Up is a surprisingly entertaining and timely debut from directors Alexis Wajsbrot and Damien Mace. The script is well-written, the events are rather intense and the film benefits from two strong and convincing performances from its young leads, Garret Clayton and Gregg Sulkin. They’re unlikeable, but boy are they good at it.

The first 20 minutes of Don’t Hang Up had me considering whether to end it all there and then. The film, not my life. We’re introduced to the two main guys, Brady and Sam, through a sequence of painfully loud and OTT edits of their video pranks, coupled with audience reactions, comments and a soundtrack that suits a club in Ibiza. It’s harsh, noisy and immediately off-putting. Don’t hang up? Try and stop me. Alas, I’m not one to give up so easy, so I pursued and waded through the mess of videos, split-screens, city scenery, freeze frames, scrolling comments and generally crazy editing, in the hopes that the rest wouldn’t be that bad. It isn’t.

20 minutes in and I’m sold. Once these two idiotic teenagers are brought down off their internet-famous pedestals and into the real world where actions have consequences, Don’t Hang Up is excellent. The film finds its footing and becomes an entertaining, relevant and almost unpredictable tale of revenge. This is a story of two guys getting punished for their unforgiveable actions and the initial hate I had for these characters comes in very handy when things go awry for their planned drunken evening. Watching the two struggle with their impossible dilemma; forced to decide to save themselves or the few people they care about is a lot of fun. We’re not meant to like these boys, we’re not meant to wish for them to make it out alive and, if anything, the worse things get for them the better. Don’t Hang Up is the best kind of twisted fun, where the we are allowed to root for the killer without feeling like we psychologically disturbed or due to be locked in a room with padded walls.

Sure, there is a heavy dosage of Saw elements thrown in; the flowing camera movement even has James Wan’s name written all over it and there are specific decisions in Don’t Hang Up that have been ripped straight out of Wan’s torture franchise with very little change. It’s impossible for a film like this to not adopt ideas from previous films, because this story has been done so many times. The lack of originality will be problematic for some and certainly the film would have benefited from more of its own unique ideas, but there is simplicity in this streamlined narrative that is impossibly appealing. Don’t Hang Up makes up for its lack of thematic and narrative creativity with the ease at which it grips you by the throat and demands that you pay attention. The well-timed drip-feeding of information and the well-structured unravelling of events that go from bad to worse, is quite excellent and ensures that we won’t be hanging up on this film until the end.

Putting aside the film’s intrusive beginning, Don’t Hang Up’s later editing choices heighten the tension and work well at suggesting that the film is almost happening in real time. The camera flows from room to room with very few cuts, allowing us to feel the time ticking by as the characters do. There is an undeniable understanding of crafting intensity behind this camera and it is impressive to see a low-budget horror film focusing so intently on technical aspects, rather than concerning itself with creating the most jump scares it can. Horror is more than shouting “boo!” at your audience; it’s about getting under their skin, generating a type of fear that resonates and lingers, and Don’t Hang Up succeeds in keeping its audience on their toes. Sure, it’s more about shocks than scares and like the Saw films this one so faithfully mimics, a fascination with blood, creative killing and plot twists is favoured over genuine terror. It won’t keep you up at night, but it will might teach you a moral lesson. 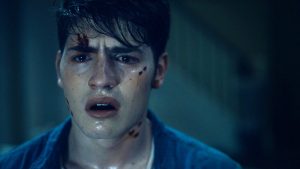 The lesson here is to think before you act, to consider others before you make a decision that will change your life and theirs forever. This is not a warning about innocent pranks or a call for banning internet jokes, but a hard-hitting reminder that sometimes you can go too far.  If you’re throwing a pie at people in the streets, you’re an idiot, but if you’re telling strangers their children are dead, you’ve crossed a line. This may be an exaggerative depiction of what can happen if you prank call the wrong person, but this is fiction and in fiction you can do as you please. Don’t Hang is nothing new, but it’s a fun ride and a memorable one at that.