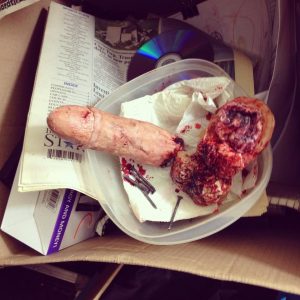 The film opens as it means to go on, with a young couple drinking, fucking, dying in the woods. Their attacker is seen pretty clearly even at this early stage, and with an appearance somewhere between the Creature from the Black Lagoon, Don Dohler’s Night Beast (look it up) and the alien from Xtro, is a rubbery delight to behold. The couple in the opening scene are an early indication of what elevates the film from the porny, homemade slasher that in many ways it is, and that is the fact that the majority of the lead cast are natural, likeable and crucially, believable. Indulging in incidental dialogue and casual bickering, the core group prove far less annoying than the teenage meat that populate any number of modern American horror flicks with 100 times the budget and more mainstream distribution.

With a title that riffs on gonzo 1981 slasher Don’t Go in the Woods, Burkett’s film actually feels closer to the shot-on-video no-budgeters of the late 80s/early 90s, or the DV-shot straight to video flicks from a decade later. Sex, violence and casual, improvised dialogue take precedence over plot and structure, the film revelling proudly in its low budget and DIY approach. The contemporary metal tune that blasts over the opening credits, together with unaccountably carefree violence and frequent (predominantly female) nudity, suggests a hard push towards young, male, stoner audiences, for whom it could easily become a low-end cult favourite. In its adolescent single-mindedness though, Don’t Fuck in the Woods is strangely easy to admire for how consistently dedicated it is to its throwaway simplicity. With a run-time of barely an hour (boosted by a blooper reel interrupting the closing credits), the film’s lack of structure or narrative detail hardly impacts on how weirdly enjoyable it all is. The forest-dwelling creature is given no context or mythology; it simply is there, and anyone who encounters it will likely die. There is a brief moment when the campers question why it has chosen to remove a victim’s ovaries, but the plot does not concern itself with attempting an answer. Then there is of course, the title, which washes away any pretensions of reputable distribution. 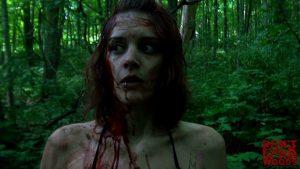 The cast also fuel the film’s philosophy of sidestepping accepted tropes, and represent an almost believable group of young friends. Their appearances go some way towards characterisation; they are not perfect, toned bodies primed for onscreen sex scenes and little else, but tattooed, scruffy or overweight individuals having fumbled sex in cramped tents. As such, the sex scenes themselves are not cringey and oversold in their attempts to titillate, but reckless and unpractised, and with each different to the next. Similar can be said about the kills, which, while graphic, will more likely raise a laugh and a cheer than squirms and discomfort.

Don’t Fuck in the Woods has little to no plot, a barely-there script and a monster who is never explained. It is knowingly juvenile, but not deliberately ‘bad’ like so many ill-judged modern slasher and monster movie cheapos. It knows exactly what it is and what it is aiming for, and is wholly dedicated to achieving it, with a swift run-time, fast pace and unexpectedly watchable characters. Most admirable of all perhaps, is its utter refusal to aspire to more than it is; I can think of no other recent film so content and indeed proud of its lunkheaded makeup of the barest essentials of an exploitation film. It’s not going to be for everyone – I’m still undecided if it’s for me – but for this if nothing else, Don’t Fuck in the Woods is deserving of a watch by those outside of its obvious audience demographic, although an open mind may be required.