Don’t Cry, It’s a Poster for I Am Not a Serial Killer

A new UK quad poster has been released to remind us that I Am Not a Serial Killer is set to be with us in December. It shows the film’s young lead Max Records bleeding black tears. Don’t fret, it’s only his make-up. It also gives us a look at the film’s snowy setting, which becomes a beautiful backdrop for the film’s eerie, unsettling and ice-cold events. 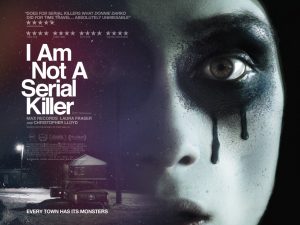 We caught I Am Not a Serial Killer last week and we loved it. It’s a refreshing and unique serial killer thriller, propelled by 2 fantastic performances from Records and his co-star Christopher Lloyd. Look out for our review soon; it’s going to be an extremely positive one.

Synopsis:
In a small Midwestern town, a troubled teen with homicidal tendencies must hunt down and destroy a supernatural killer whilst keeping his own inner demons at bay.

I Am Not a Serial Killer screened at the recent London Film Festival to overall rave reviews and it’s gearing up for a release for the rest of the UK on 9th December 2016. The film has already had a limited theatrical run in the USA, now it’s time to see what the UK thinks of it.

I Am Not a Serial Killer comes from director Billy O’Brien (Isolation, The Hybrid) and additionally stars Laura Fraser and Karl Geary.