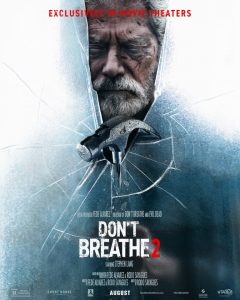 The sequel to Fede Alvarez’s 2016 horror hit, Don’t Breathe 2 will see the Blind Man (Stephen Lang) hiding out in an isolated cabin. In the years following the shocking events of the original movie, he has taken in and raised a young girl orphaned from a house fire. But their quiet existence is shattered when a group of kidnappers show up and take the girl, forcing the Blind Man to leave his safe haven to save her.

Rodo Sayagues, who co-wrote Don’t Breathe and Evil Dead, is in the director’s chair this time around. The film is set to hit theatres on August 13th.