A trailer has been released for the supernatural spooker Death on Scenic Drive and it warns to not answer the door when death comes knocking. The story follows woman named Larissa who takes a housesitting job in the countryside, but is shocked when she discovers satanic illustrations and an entity that wants to consume her, turning her into Death itself. 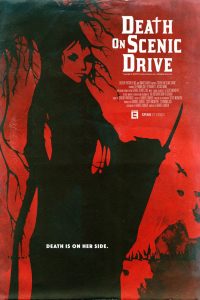 The trailer boasts a lot of spooky and bloody goings-on that promise a tale that blends supernatural horror with an ominous threat of isolation. The events and horror escalate into madness and paranoia for Larissa, just how will she make it out alive?

Synopsis:
A young woman named Larissa (Stephanie Ash), encounters an entity that transforms her into death itself, and reins a violent storm against Dallas Henson (Ry Barrett) and the family that resides there.

Death on Scenic Drive has been directed by Gabriel Carrer whose 2012 film In the House of Flies won Best Feature and Best Director at the Blood in the Snow Canadian Film Festival. The film stars Jeff Ash, Ry Barrett and Stephanie Ash, and has recently finished production. Expect a release date to be announced imminently.