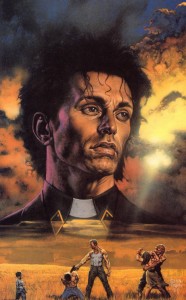 AMC’s Preacher pilot series, written and produced by Seth Rogen (This Is The End), Evan Goldberg (Superbad, Pineapple Express) and Sam Caitlin (Breaking Bad) is based on the comic book series by Garth Ennis and Steve Dillion. Preacher tells the darkly funny tale of Reverend Custer, a slightly rogue man of religion, who discovers God has abandoned Heaven leaving Custer to take matters into his own hands.

The vitally violent comic books are now being transformed, and AMC have found their leading man. Seth Rogen announced the casting decision on Twitter, stating that Dominic Cooper is going to save our souls.

Although only a pilot, if it takes off then a full series will most likely premiere in 2016. We will bring you all the latest updates regarding this story.

Synopsis:
When an unlawful Preacher decides to hunt down God, the fight between good and evil becomes a little skewed, leaving an ambiguous good cop, bad cop character. This character is Reverend Jesse Custer, and who better to play him than the brooding Dominic Cooper (Abraham Lincoln: Vampire Hunter, Dracula Untold).