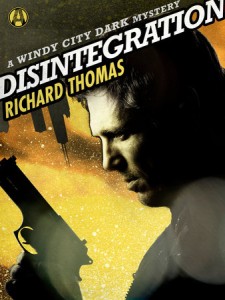 ‘There are no mirrors in my apartment. I have forgotten my own face. My wife is a distant memory, and I can’t remember what she smells like, the melody of my son’s laugh, the butterfly kisses of my daughter’s soft lips on my cheek. They are shadows that haunt my every movement, and I drown them out, blur them every chance I get.’

Disintegration is a relentlessly dark nightmare of a thriller. The story of a man irrevocably lost, a past always just out of reach of his memories, tainted with tragedy, loss and ruin.

Told in first person our narrator is a mystery man existing in the backstreet’s of the Windy city. Manipulated by Vlad his pusher, controlled and compelled by a mixture of drugs, sex and a complete loss for the value of human life, to kill repeatedly every time that envelope gets pushed under the door. A tattoo honours every kill and this man looks nothing like his former self, no resemblance to the man who once had a family to care for.

An assassin whose targets are the worst of humanity, killers, abusers, wholly justified or so he believes. The dregs of society, those with no chance or need of redemption, the very thing he searches for but just what’s real in this twisted existence of killing, exploitation, sex, violence and the sense of a man fading, living on the edge, a breath away from falling off it.

Searching for answers persistently kept from him, forever watched and continually broken, clinging to a semblance of life, drifting through each day, waiting for the next job and a step away from the end.

Disintegration is a story of a man lost, desperate to find a path into the future but fighting through a fog that offers only resistance,  a man’s fight to find out who he is, what he was, what happened to a family he’s aware of but only through slithers of consciousness. This is without doubt a dark and dirty trip through a bleak haze that never seems to end but it’s one well worth taking. The style of writing is one that’s becoming more and more popular, a short, sharp sentence structure that gets you in the mind of the protagonist but never allowing you to settle into a rhythm. Certainly giving an intense feel amidst the darkness.

This was my first read from Richard Thomas and it definitely won’t be my last.