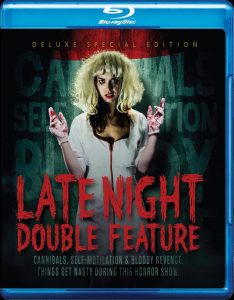 Parade Deck Films have unveiled the artwork for the upcoming DVD and blu-ray release of their award-winning horror anthology Late Night Double Feature.

Directed by Navin Ramaswaran (One More for the Road), Torin Langen (Fondue), and Zachary Ramelan (Dead Rush) (with Kelly Michael Stewart and Jason Tannis as ‘collaborating directors’), the film brings its own spin to the structure of anthologies, with a tale of revenge wrapping around two films-within-a-film.

During a late night taping of Dr. Nasty’s Cavalcade of Horror, bloody chaos takes place while screening two features (Dinner for Monsters and Slit). Samantha/Nurse Nasty is frustrated with how the show is being run by its womanizing director and its drunk and crazy host, Dr. Nasty. 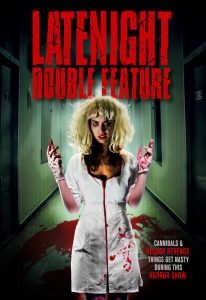 The film arrives on DVD and blu-ray on November 21st, with the blu containing over 7 hours of special features! It will be available on Direct TV, DISH Network, Amazon Instant Video, Google Play, and iTunes from December 6.