We don’t really want to start thinking about the autumn because summer has barely begun, but the list of directors has been announced for Season 3 of From Dusk Till Dawn and we are excited! Check out the full list below:
1.Dwight Little (Halloween 4, Sleepy Hollow, Bones )
2. Robert Rodriguez (Planet Terror, Machete)
3. Alejandro Brugues (Juan of the Dead, ABC’s of Death 2-  Segment ‘E’)
4 & 8. Eagle Egilsson (Lucifer, Once Upon a Time)
5. Eduardo Sanchez (The Blair Witch Project, Lovely Molly)
6. Rebecca Rodriguez (Spy Kids: All the Time in the World in 4D)
7. Diego Gutierrez (Warehouse 13)
9 & 10. Joe Menendez (Ladrón que roba a ladrón) 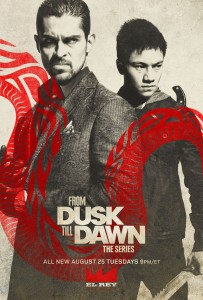 Many of the directors, including Dwight Little, Eduardo Sanchez and, of course, Robert Rodriguez, have directed previous episodes of the show, but Rebecca Rodriguez, Alejandro Brugues and others, will be making their From Dusk Till Dawn debut.

It’s undoubtedly a strong set of directing talent that has got us even more excited for the upcoming new season. From Dusk Till Dawn Season 3 will start airing this autumn on El Rey, but will also be available to watch on Netflix.