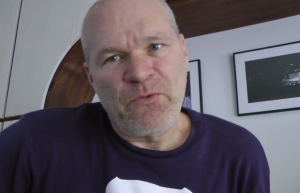 You may or may not have heard of German filmmaker Uwe Boll, but he’s certainly addressed you in one way or another as he posted a video telling horror fans to “fuck” themselves and their mothers, how charming.

Boll is known for creating quite dire films, although he has had a few gems including Stoic, Seed and Rampage, and it was for the latter that he created a Kickstarter campaign to raise funds for a third movie. Boll has previously been using a financing loophole to create awful films with a high budget and big names like Jason Statham, but after that was stopped a few years ago he reverted back to indie film making and funding.

His 2009 political thriller Rampage was about Brendan Fletcher as an unstoppable man with a desire for revenge who builds a suit of armour from kevlar and goes on a bloody killing spree. It was one of his better films and was surprisingly given a sequel, and Boll has been campaigning recently to raise the funds for a third film. As we all know, Kickstarter campaigns don’t always reach their target unfortunately, but it seems no-one informed the director of this.

This is the second attempt for Boll as his first pledge only raised $6,375 of $100,00, although this time the money was about half, it still wasn’t enough at $25k of the needed $55k. With four days to go it seems the fans of the horror world have voted no, and therefore that’s something that should be maturely dealt with.

Clearly Uwe Boll didn’t get the memo as he’s posted a video entitled “fuck you all” to Youtube, in which he has nearly a two-minute rant about how those involved with the campaign, Kickstarter itself, and all us innocent fans have failed him and we should all go fuck ourselves and our mothers. The video is quite entertaining, although the message is rather childish – have a look yourself and let us know what you think!