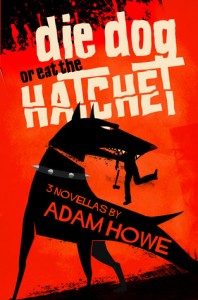 Adam Howe proves with the three stories in this book that he can basically write anything. And write it very well indeed. You have monsters of the mythical kind and monsters of the human kind. You have a sadistic trait in a lot of characters that he writes extremely well. I wouldn’t read this book around meal times if I was you. I would, however put it straight to the top of your list if you have it. If you don’t have it, you know what you need to do!

Here’s what I thought of each of the stories in this novella compilation:

DAMN DIRTY APES
Synopsis:
Reggie is a bouncer at The Henhouse. When one of the “girls”, Eliza and her fella Lester barge into the club one day claiming to have been attacked by a Skunk Ape, The Henhouse’s owner, Walt, sends Reggie out to the woods to see what he can find.

Along with Salisbury, a self-proclaimed Skunk Ape hunter, and also Lester and Eliza, Reggie goes on the hunt for the monster that has dragged their friend Ned off into the woods.

Will they find the Skunk Ape? Does it even exist? Will Ned still be alive?

This is fantastic. What a way to open a collection. This is totally not what I was expecting and to be honest I’m very glad it wasn’t.

What we have here is a story with an old plot. A mysterious monster that no one is sure even exists. A drunk, a stripper, a bouncer and a man who seems to be completely off his tree, go looking for the monster. Chaos ensues.

The difference with this one is that as well as the, at times, horror element to the story, it is filled with a dark humour that will have you laughing out loud as well as in your head. A lot.

The characters are as described above. They are all very likable in their own way. Eliza especially. She is a stripper with a mind of her own. It’s not a very smart mind but hers none the less. She has high ambitions although they wouldn’t be classed as high to many. You see this story through the eyes of Reggie. He is a disgruntled ex-prize fighter that maybe expected more from his life but has to live with his lot.

I have to say again; this is a fantastic novella. It is full of tension but tension that is very tongue in cheek. I can imagine this one being presented as a B movie if it were on screen but I could see it becoming a cult film.

Adam Howe’s writing is superb in this. You do get the fear element and you definitely get the horror side of things. There are a couple of scenes when the group get out into the woods where the tension is palpable and very real but the humour side of things is never far away. This story is hilarious.

I love this style of writing and Adam Howe is very very good at it. Can’t wait to read the next one!

DIE DOG OR EAT THE HATCHET
Synopsis:
Terrence Hingle has escaped from a mental institution. He has been locked up because he is a murderer. A mass murderer.

While on the run he stumbles across a diner and kidnaps one of its employees, Tilly, and forces her to drive him as far away as she can, as quickly as she can.

When they stop for gas, they meet Dwayne and Dwight. Also mentally unstable, Dwayne and Dwight change Terrence’s plans very quickly and he soon becomes the victim, while Tilly has to fight everyone to survive.

This is like Deliverance on speed! Brutal, bloody, gory and sickening.

Terrence Hingle is as unhinged as they come. When you get introduced to Dwayne and Dwight, you realise Terrence is a pussycat. Tilly is just a normal run of the mill girl, trying to make ends meet until she ends up in the nightmare to end all nightmares. She just wants to survive, but from the very outset, you don’t see this happening.

This is a fast paced slasher like all of those old horrors you used to watch in the 80’s. It’s perfect. It has chases. It has blood and guts. It has many scenes where you will hold your breath and try your hardest to keep your dinner down where it belongs. It’s edge of your seat stuff where all you want is for Tilly to get home safe and sound and the bad guys to die a horrible death. In putting Terrence up against Dwayne and Dwight, Adam Howe gives us an epic battle just like Godzilla verses King Kong.

Totally different than the first story, this proves Mr Howe has a versatility to write a horror story with the mythical monsters and the human monsters. Two different styles but equally as scary and enthralling as each other. His words just flow across the pages, totally ensnaring you from the very beginning and refusing to let you go until it’s all over. But only when he wants it to be all over.

GAITOR BAIT
Synopsis:
1930’s piano player Smitty “three fingers” is on the run after being caught with the wrong man’s wife.

He stumbles across The Grinnin’ Gaitor and is taken in by the owner, Croker, and his gorgeous wife, Grace.

After starting a torrid affair with Grace, Smitty must come up with a plan to get away from Croker before he finds out and introduces him to “Big George”, the gaitor that lives in the pond out back.

Noir, bootlegger crime / horror set in the 30’s. This is absolutely perfect. Nothing else to say really.

Again, Adam Howe has written something completely different to the other stories in this book. The versatility of this man’s writing knows no bounds. This story is written in just the most perfectly atmospheric way imaginable. The characters are superb. You know straight away what role they are supposed to play in the story. You feel like you have known them all your life. You feel like they are real.

It’s an old plot that to be honest is synonymous with a lot of old black and white films you may have watched years ago with Bogart and suchlike. It sets the scene just right. It’s smoky. It’s black and white. It’s here’s looking at you kid. It’s wonderful.

I have nothing more to say.

To summarise: A three novella collection that you absolutely must have in your collection. I give this one the highest possible recommendation that I can. Simply Superb!