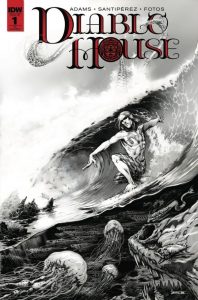 Of all the things the recent “revival” boom has brought back, horror anthologies have probably been the most fun. Inspired by the classic horror comics of yester-year, classic anthology re-prints of Creepy and Eerie alongside newer works such as Richard Corben’s Shadows on the Grave have been keeping fans coming back for a taste old-timey weirdness. Continuing on the tradition is Diablo House, a pet project by IDW’s CEO Ted Adams that explores the moral quandaries of humanity with ironic twists of fate. The work also brings back that classic staple of the anthology: a gruesome host! But he’s not your average shrivelled corpse and with his contracts, your life will never be the same.

Diablo House focuses less on random ghouls and ghosties and more on a “be-careful-what-you-wish-for” angle. The host, known only as Riley, acts as a malicious genie who allows anyone one wish as a cost for their internal soul. The first issue features one main story and one mini-tale, the longer tale focusing on a couple who dream of becoming rich. When the man suddenly finds himself on the owning end of a food franchise, the money begins to pour in, but so do the problems that come with it. Perhaps all that glitters is not gold after all? The second tale is a fun little story about our host as he tries to remember which of his many door lead to the outside! It’s a wonder he doesn’t starve to death.

Diablo House is very much an homage to old horror with an updated setting. It’s got the same twist endings and the same moral lessons that were made popular almost 60 years ago and doesn’t offer much new to the horror anthology genre. That being said, the comic is a pretty fun tribute with a clear understanding of its source material and Adams, along with artist Santiperez, do their best to bring back the old creeps vibe. Riley is a smooth-talking host, a perfect reflection of the hosts of yesteryear, and his offers are tempting enough to swing even the strongest willed of wishers. Alongside his bargains, he also quips about the state of current society, another features that was prominent during the horror boom of the forties and fifties, though instead of the threat of nuclear war, he points to Trump and reality TV. It’s a wonderful example of how the horror genre will always be the darkest reflection of modern society. 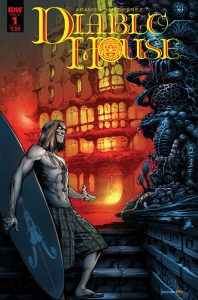 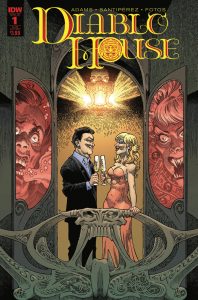 Santiperez art does an amazing job of bringing Adams vision to life while adding bits of his creative personality into the panels. His artwork is heavily inspired by old-school horror illustration and with his precise lines and classic movements, harkens back to the works of Bernie Wrightson and Frank Frazetta. Santiperez commitment to not cutting corners with Diablo House led to a classic looking comic that few modern artists are capable of doing. As stated, this a true tribute in every sense of the word. From words to lines to inks, Diablo House fits in perfectly in any die-hards collection or serves as great introduction to the world of vintage horror. Grab your copy today!