IFC Midnight acquired the US rights to The Loved Ones director Sean Byrne’s The Devil’s Candy a while back and, ahead of a March release, they’ve now put out this rather fine trailer.

The film follows struggling artist Jesse, who moves his wife and daughter to a rural house in Texas with a dark past. Jesse’s paintings quickly take a turn for the demonic and Ray, the deranged son of the property’s former owner, begins to stalk the family. The evil force that drives Ray soon takes hold of Jesse, and his family realise that they are not safe from either of them, or indeed from the Devil himself. 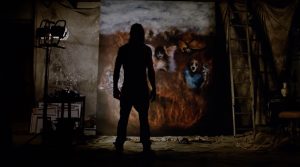 Ethan Embry, who plays Jesse, has plenty of experience in horror, having appeared in the likes of Disturbing Behaviour, They, Vacancy and, more recently, Cheap Thrills and The Walking Dead. Co-starring alongside Embry are Shiri Appleby (Swimfan, HBO’s Girls), Maps to the Stars’ Kiara Glasco and Pruitt Taylor Vince (Natural Born Killers, Identity) as Ray.

Look out for The Devil’s Candy on March 17th.