THE DEVIL OF KREUZBERG: Film Review 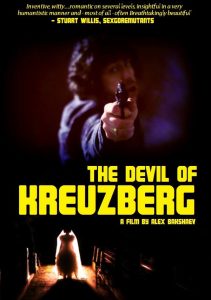 Synopsis:
A young novelist named Jakob (the splendidly monikered Ross Indecency) announces to his partner Linda (Sandra Bourdonnec) that he needs time alone to work on the follow-up to his recent bestseller. His best friend Kurt (Suleyman Yuceer) has been making ends meet by carrying out hits for the mob, but now wants out. When the tortured writer starts to have fevered nightmares wherein Linda preys on him as some kind of succubus figure, he starts to lose his grip on reality and asks Kurt to perform one last hit. On her. But are these dreams as crazy as they seem? When we see Linda visit her mother’s grave, said matriarch’s voice from beyond tells her that she is doomed to repeat a family curse and murder her lover. The family name? Karnstein.

As someone who’s left cold by a great deal of modern cinema, it comes as a pleasant surprise to come across a film by a young indie filmmaker – shot on video, no less – that offers reassurance that the medium may still have a future worth giving a toss about. At various points over the years I’ve had to sit through short and mid-length films made by graduates and ‘semi-pros’ that would have had me reaching for the stop button within seconds had I any choice in the matter. Partly because films shot on video for the most part look and sound HORRIBLE, but also because it was painfully apparent that the makers’ cinematic lexicons didn’t reach back much further than Tarantino or Spielberg. Your ever-humble pundit was even subjected to a ‘masterclass’ by such people once. Christ.

From the opening shots of THE DEVIL OF KREUZBERG, it’s clear that Alex Bakshaev’s film is something better. Here is someone who knows about film and what it’s supposed to do. DEVIL is a giallo-inflected short story (the version I saw clocked in at about 40 minutes) with an arthouse feel, shot on location in Berlin and Hamburg. The first thing that strikes you about the film is its exquisite sense of composition; almost every frame is a potential still. This, combined with astute use of the Berlin locations and the dreamy cinematography (by the director himself) create that rare thing: a film shot on video that looks stunning.

The sharp angles of modern architecture are contrasted with the ornate and Gothic, but somehow without this being jarring, instead combining to create a seamless visual whole. The overall impression is that of a twilight underbelly of the city, with blurry neon-lit sex clubs and shops lending an undeniably seventies Jess Franco-esque ambiance. The music, too, mostly from Italian artist Spettro Family (who you really ought to check out), adds immeasurably to a palpable air of sleazy menace.

Sure, there are shortcomings; with a microscopic budget and the shooting medium employed how could there not be? The three leads acquit themselves well and certainly fit the film visually, but there’s no way that their voices can escape that hollow video-recorded sound. However, this only makes the viewer want all the more to see Alex given a shot with a more substantial budget and larger cast and crew. Slick but raw, this is the kind of pure filmmaking we just don’t see enough of in the mainstream. 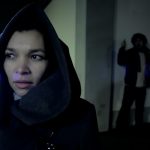 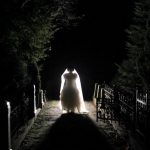 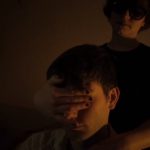 It’s no secret that it’s tougher than ever to get your film noticed nowadays, where hundreds of efforts, amateur and otherwise, are posted up on YouTube, Vimeo, and God-knows-where-else daily. But here Alex has had the courage not to try and gain attention by being outrageous, by piling on the gore and sex or adding ‘hilarious’ scenes of excessive drug taking (although perhaps the latter is a subtext; it would certainly explain why a guy with a recent bestseller on his hands would need to sell his car to leave the country post-assassination, and how these two men with seemingly little in common could have formed such a powerful bond). Although it has obvious roots in exploitation cinema, there are no cheats or shortcuts here; Bakshaev is out to impress in a genre of extremes through pure sheer artistry and skill. If this shouldn’t be respected, then I’m not sure what should.