Desolation Trailer takes us Off Trail

Not only does Sam Patton’s Desolation hold claim to the year’s coolest horror poster, it also has a brand new trailer ahead of its December release. 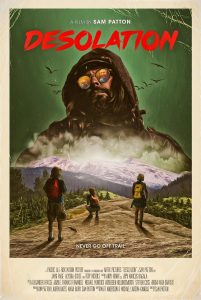 Director Patton makes his feature debut with the film, which premiered in the Nightfall category of June’s LA Film Festival. It sees a mother, her son and her best friend pursued by a lone hiker while on a trip to scatter her late husband’s ashes. Jaimi Paige, Toby Nichols and Alyshia Ochse star as the preyed upon trio, with Claude Duhamel as The Hiker. Official synopsis below.

“After the death of her husband, Abby (Page), her son, Sam (Nichols) and best friend, Jen (Ochse), venture into the forests of upstate NY on a camping trip, only to find themselves in danger from a mysterious hiker (Duhamel) with malicious intentions. As the trio attempts to navigate the vast wilderness in search of safety, they find themselves the hunted prey in a deranged killer’s terrifying game and the only way to survive is to kill – or be killed.”

Desolation hits limited US cinemas and VOD December 15th. In the meantime, I’m gonna stare at that poster a little more.