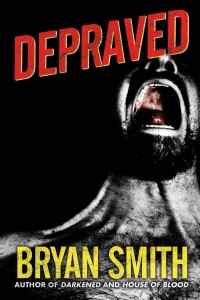 You know what you’re going to get with a Brian Smith novel, a rip-roaring, blood soaked horror with loads of sex and some wickedly entertaining violence.

With Depraved we have a backwater redneck town called Hopkins Bend that really doesn’t like visitors, in fact they have a nasty habit of preying on people travelling through and then cooking then up in a feast for the old families. Rednecks and cannibals do seem to get the short end of the stick in horror circles and it has become a familiar and well used backdrop.

We join various characters as they strive to escape the clutches of the old families, get sold to a strip bar for a new life of debauchery and lap dancing, survival comes in many guises it seems. Including various scrapes with the law, who are definitely not the people to turn to for anybody lucky enough to escape. All told it’s a decent read, my only complaint was the poor timing of a number of the sex scenes, I’m pretty sure a girl whose been raped, tortured and been forced to kill lots of people during a somewhat fortuitous escape is going to be on the lookout for a sexual encounter. No, she’s going to be desperately looking to get the hell out of Dodge, so to speak but she does. Tongue in cheek it may be, but it ruined the overall flavour of the story.