Synopsis:
When Detective Ray Beckett’s daughter is kidnapped by a demonic entity, he seeks the help of Taryn Barker; a badass female who has her own demons to face. 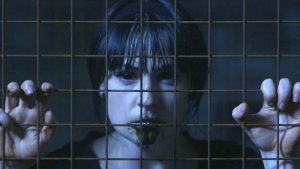 There is something undeniably cool at the heart of Demon Hunter, where the stylish cinematography and upbeat soundtrack succeeds in presenting a slick and action-packed thrill-ride. The visuals are awash with neon blues and yellows that help to give the film a neo-noir edge, emphasised by the film’s focus on one woman’s quest for revenge. As an example of modern horror-action – both in terms of its overtly feminist focus and mostly impressive scenes of combat – Demon Hunter is a flawed, but wholly watchable piece of a cinema.

Moments of intrusive editing and clichéd dialogue are what prevent Demon Hunter from being truly remarkable, with the film suffering from those typical tell-tale signs of a feature with budgetary restraints. Niamh Hogan certainly gives it her all in the role of the Taryn AKA the Demon Hunter, but her dedication to the performance cannot hide her lack of combat skills. As was the key problem with Marvel’s Iron Fist, fast-paced editing is used as an attempt to disguise scenes where Hogan’s fighting is less than credible. Unfortunately, this decision draws more attention to her shortcomings, making her an unconvincing leading lady.

Adding to the flaws comes with the script’s consistently clunky dialogue, where it is impossible to believe that anyone would speak words such as: “I stare directly into the darkness” with a straight face. It is also unbearably melodramatic in points, where flashback scenes are used to focus on Taryn’s heart-breakingly close relationship with her now dead sister. Fades to black and soft piano tones escalate the drama to thoroughly pull at your heart strings, but these are the moments that take you out of the story. You’ll be able to feel director Zoe Kavanagh’s crafty hands as she tries desperately to drum into you the legitimacy in Taryn’s dark transformation. Unfortunately, it has the opposite effect and hones in on the film’s inability to successfully travel the line between emotion and horror.

For the most part, it is easy to forget the film’s humble budget and middling acting, because the heart, confidence and spirit at the centre of the story is unmissable. You have to credit Kavanagh for delivering an emotional core, even if it isn’t wholly effective. Demon Hunter’s imperfections are as obvious as Taryn’s evolution from a natural beauty to a gothic femme fatale, but they are easy to forgive if you are able to be charmed by the film’s emotive drive and well-meaning central messages.

Demon Hunter is all about a woman taking on the system; the supernatural patriarchy that has its grip on her has taken its toll, forcing her to face her own demons in order to put them to bed. Taryn’s stone-cold exterior is contrasted with her emotional centre that bursts with feelings of pain, regret and guilt; crafting her well as a modern icon for credible feminism that celebrates the overwhelming feelings of her character, rather than painting them as imperfections. She’s certainly no Ripley or Laurie Strode, but as a celebration of alternative femininity and strong females, her character is a step in the right direction. 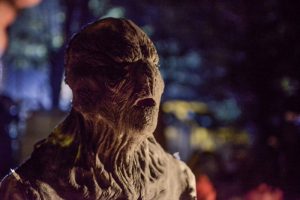 Demon Hunter is a worthwhile watch for those that prefer an action thread to run through their supernatural horror, but there is an overall lack of authenticity that will fail to convince you of the film’s undeniably silly storyline. This may appeal to younger audiences that are after something a little darker than The Hunger Games or the Divergent series, but mature horror fans will probably be eager to wash their hands of Demon Hunter’s inescapably predictable turn of events.