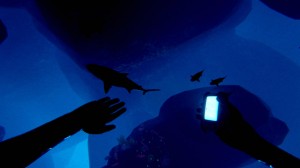 The sea can be either beautiful and mesmerising, or terrifying and mysterious and the first official trailer for Iron Fish goes with the latter. Game designer Dean Edwards and BeefJack Games have created Iron Fish, a new thriller/horror psychological first person game that is set in one of the most nightmarish landscapes.

In Iron Fish you play the role of Cerys, a deep-sea diver that is given a mission to explore the deep and dark corners of the ocean after receiving a mayday call. Here’s how BeefJack have described the game:

Play as Cerys, a deep-sea investigator for an elite British Naval group, and use her state-of-the-art, government-funded equipment to submerge as far as we can go. But seven miles under the surface is dangerous territory for humans, especially when only five per cent of Earth’s oceans have been explored so far.

Cerys’ missions will lead the player to uncover mysteries of the deep and survive its harsh and perilous environment. Come face to face with creatures that have never seen the light of day, question what is science or myth, and solve the unanswered questions of Cerys’ past.

The first eerie trailer for the game definitely reminds us that sea creatures are some of the most frightening monsters of this world, just think about how you felt after watching Jaws. We won’t be going near the sea anytime soon after playing this one. The game is expected to be released by the end of the year, but we will keep you updated.