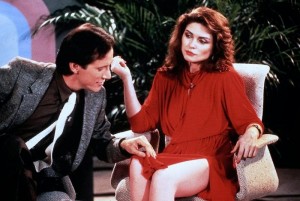 Exciting casting news has arrived for Osgood Perkins’ creepily-titled haunted house flick I Am the Pretty Thing That Lives in the House, currently in pre-production. Joining a strong cast that so far already includes Bob Balaban (Close Encounters of The Third Kind, Altered States) and Brits Ruth Wilson (TV’s Luther) and Lucy Boynton (Miss Potter) is none other than Blondie legend Debbie Harry.

No stranger to horror cinema, Harry is probably best remembered within the genre for her striking turn in Videodrome, but also starred in Tales from The Darkside: The Movie, Body Bags and Anamorph. Her return to the genre is most welcome.

Netflix will be the exclusive streaming home of the thriller, which Perkins wrote and will be directing. Principal photography is set to begin in Ottawa on February 16th.

I Am the Pretty Thing That Lives in the House follows Lily (Wilson), a young nurse hired to care for elderly Iris Blum (Harry), a reclusive best-selling author of horror and crime stories who has chosen to live out her final days in her beloved 19th century farmhouse in Massachusetts – a home that holds a horrific ghost story of its own that inspired her most famous book.

I Am the Pretty Thing That Lives in the House is Perkins’ second film as director, following last year’s horror February. He began his film career playing the young Norman Bates in Psycho II, and has acted in such films as Secretary, Dead & Breakfast and 2009’s Star Trek.