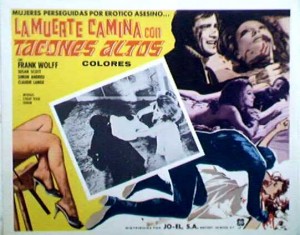 Following the success of The Bird with the Crystal Plumage in 1970, film producer Luciana Ercoli capitalised on Argento’s box office triumph with his second directorial feature, Death Walks on High Heels (following his debut, Forbidden Photos of a Lady). Finally released on blu-ray in the UK and remastered by Arrow in a double disc set, with quasi-sequel Death Walks at Midnight, this genre transcending giallo thriller flaunts classic sub-genre traits but is so much more than an off-the-cuff cash-in. Set primarily in Paris and London, DWOHH resounds as a scintillating fusion of horror, mystery and crime drama, with gaudy visuals, a lounge/ jazz soundtrack, garish sets and prominent Italian film aesthetics that reverberate throughout, even when the story saunters to rural England for a murder mystery finale.

At the time of DWOHH’s inception in the early 1970s, giallo was still evolving as a sub-genre, before Argento returned to the scene (following a failed swerve into historical comedy) with trope-cementing masterpiece Deep Red in 1975. Director Ercoli and screenwriter Ernesto Gastaldi toy with key components

that would later become common sub-genre staples. The set-up unravels delicately but a knotted confrontation threatens to welter the narrative into an incomprehensible mess before twists decant through the second half. Crime, action and mystery elements meld well with mounting trepidation and while there aren’t too many gory death scenes, judiciously tailored terror resounds via a well woven sense of unease.

Nieves Navarro (acting under the name Susan Scott) bedazzles as spiky dancer Nicole, exuding spice and anger as a Hepburn/ Dietrich hybrid, while Simón Andreu electrifies as Nicole’s lover Michel. The supporting cast are also compelling, for a sub-genre typically rife with anarchic gesticulations and over-the-top dubbing.  A placating soundtrack by Stelvio Cipriani embraces the visuals with chary finesse, twisting red-lit lurid strip clubs and pseudo porn facets into a scratched off-cut of debonair chic, instead of the usual course and grimy antics of mid-seventies grindhouse/ exploitation cinema.  The prominent sub-culture at the heart of DWOHH augments the character enforced by the story, which is also fashioned from London’s stultified brutalism and the natural greens of the English countryside. 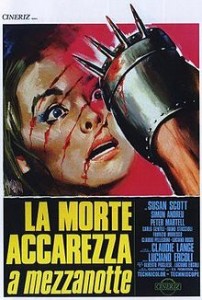 DWOHH is conceptually stimulating due to its well woven plot strands and whodunit elements. There are a few occasions where the story meanders lost among the supporting players, sub-plots and general subterfuge, but scattered pieces fall into place and Gastaldi resolves his script for a fitting finale. Astounding twists reinforce DWOHH and are shrewd substitutes for a notable lack of bloodshed (although one scene will leave hardened horror fans squirming into their fists). DWOHH’s main strength is the stern sense of mystery that flourishes throughout. Gastaldi and Ercoli toss red hearings down blind alleys like blood dipped confetti, aiding the film’s metamorphosis into a stout giallo, light on gore but dense in style, complexity and a clandestine plot that allures, eludes and ultimately astounds .

Extras:
The three interviews on this disc provide a fascinating insight into DWOHH, its era and production. From Spain with Love, is an interview with the late Director Luciana Ercoli (who passed away in March 2015) and star Nieves Navarro, conducted at their Barcelona home in 2012. Ercoli fondly recalls his early film career working as an errand boy on various productions alongside the likes of Charlton Heston, Anthony Quinn and Sophia Loren. Ercoli went on to be an Assistant Director, Production Manager and Producer before directing  his first feature, Forbidden Photos of a Lady, in 1970. Navarro reminisces on her times as a younger actress, what it was like working with Simón Andreu (her Death Walks co-star), and reveals why she changed her name for the silver screen. 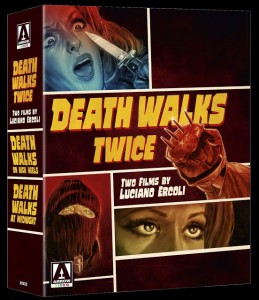 In the Master of Giallo short, screenwriter Ernesto Gastaldi deliberates over Death Walks on High Heels and gives a crash course on how to write a giallo film, suggesting never to reveal the last 20 pages of the screenplay to the director, so he doesn’t know who the killer is. Gastaldi also recommends limiting the number of sets and characters (a rule which he broke with DWOHH and its sequel). In the final segment Death Walks to the Beat, composer Stelvio Cipriani discusses his life making music for movies, what it was like working with Nora Orlandi (vocalist for DWOHH), the integrity of jazz and how he never limited himself by working in one specific genre. Other extras include trailers and an audio commentary by Tim Lucas (Video Watchdog).