Death Note Adaptation To Be Directed By Adam Wingard 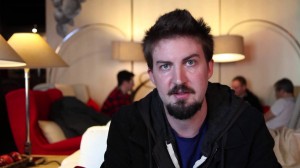 Write yourself a reminder keep an eye out for the latest American adaptation of Death Note, because it’s being directed by the blood splattered mind of Adam Wingard (VHS).

The popular horror manga story was originally being directed by Shane Black (Kiss Kiss Bang Bang), although he has since left the project for unknown reasons. Fortunately, the twisted mind behind The Guest and You’re next, Wingard, jumped at the chance and will begin Death Note after he’s finished filming his upcoming horror The Woods.

Simon Barrett, who has worked on all of Wingard’s gruesome and inventive films, will write the script alongside him in this tale of deathly notebooks. We will update you when we have more information about the filming of Death Note.

Synopsis:
When a young man finds an old and peculiar notebook, he comes to learn that he can kill anyone he wishes, just by writing his or her name in the book. Hell bent on using the book for only good, he goes on a mission to kill those who he believes are evil, but a reclusive detective is always a few steps behind him.