The story comes courtesy of E! News, who spoke to the cast at CinemaCon. “I did a lot of things to create a dynamic to create an element of surprise, a spontaneity and to really break down any kind of walls that may be there”, Leto explained of his odd behaviour. “The Joker is somebody who doesn’t really respect things like personal space or boundaries.”

“He went full Joker” says Will Smith, who plays Deadshot. “He really set the tone. He wasn’t playing with it. He was dead serious as an actor. He was going in and he was 100 percent going into this character.”

It’s all part of his process then, which Adewale Akinnuoye-Agbaje – who plays Killer Croc  – seems to respect; “It was a good gift because it had the effect of unifying us as a group because then it became us against him. We sent the messenger back with the dead pig and our own personalized message. It got the ball rolling.” 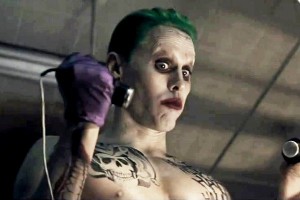 Time will tell if all this craziness has made for stronger performances. If nothing else, it’s gonna make for one hell of a DVD extra.

Directed by David Ayer and also starring Margot Robbie, Viola Davis, Jai Courtney, and Joel Kinnaman, Suicide Squad opens in the UK and US on August 5.