Dead Awake Trailer Will Keep You Up at Night 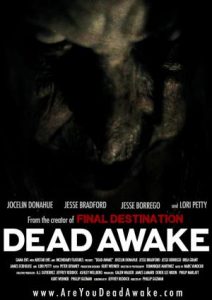 The first trailer has just landed for Phillip Guzman’s Dead Awake, ahead of the film’s screening at Los Angeles’ Shriekfest next month. Written by Final Destination creator Jeffrey Reddick, the horror-thriller centres around the real-life phenomenon of sleep paralysis (explored in terrifying 2015 doc The Nightmare).

The House of the Devil’s Jocelin Donahue plays a straight-laced social worker who finds herself battling an ancient evil following an investigation into a string of mysterious deaths. Tank Girl herself, Lori Petty (who so impressed in the latest season of Orange is the New Black) also stars, along with rising star Brea Grant (Halloween II, Beyond The Gates) and Jesse Bradford (Hackers, Cherry Falls).

With a particularly strong female-led cast, frightening real-life backdrop and the J-horror-esque visuals seen in this trailer, Dead Awake could be a real winner.