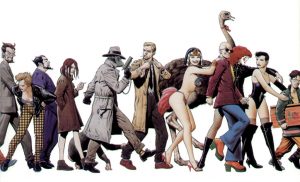 Vertigo has been the pinnacle of comic ingenuity and originality for the past 25 years. Not only did it mega start dozens of writers and artists careers and help revive once forgotten comic characters into continuity, it also was one of the first companies to expose casual readers to a ‘mature’ comic-line. With game-changing works and unprecedented success as the longest running imprint in DC’s history, it’s no wonder that DC would want to celebrate its imprints success with a 300-page hardcover work documenting the history of the company.

Titled Vertigo: A Celebration of 25 Years, the work will feature an inclusive tour of the history of Vertigo through a mix of oral history and behind-the-scenes looks at what went into making some of its most famous works. DC’s official press release states:

This deluxe hardcover relives the history of the innovative imprint as told by the people who lived it. A luxurious hybrid of oral history and retrospective art book, VERTIGO: A CELEBRATION OF 25 YEARS features a comprehensive timeline of every Vertigo project ever released; long-lost and never-before-seen artwork and story material; insightful new interviews and behind-the-scenes intrigue with Vertigo writers, artists, editors, designers and publishers; and all-new short stories and illustrations from classic Vertigo creators and other top comics talent.

Vertigo has long been renowned for some of the greatest graphic storytelling of all time, as it’s been home to such groundbreaking series as THE SANDMAN, SAGA OF THE SWAMP THING, THE INVISIBLES, DOOM PATROL, Y: THE LAST MAN, PREACHER, FABLES, 100 BULLETS—and that’s just to start. With Neil Gaiman, Grant Morrison, Brian K. Vaughan, Scott Snyder Garth Ennis, Brian Azzarello, Frank Quitely, Matt Wagner, Jeff Lemire and countless more among its illustrious alumni, Vertigo has been the place where iconic talent and story meet. VERTIGO: A CELEBRATION OF 25 YEARS is a dynamic look back at some of the most historic events in industry history.

Now that’s quite the collection!

The work, priced at a very reasonable $40, will be released in August 2018 which happens to coincide with a planned relaunch of the entire imprint. While there is no details on what the launch would include or what the comings-and-goings are going to be of some the imprints famous characters, DC has assured that the relaunch will be handled by well-known creators who know their stuff. Who those creators are is also a mystery.

While many fans are excited for the collection, some are questioning if the oral history will also include the darker history of Vertigo, such as the constant fight for creator rights which forced many creatives to move to opposing comic companies or the odd timing of DC’s “Essential” Line, which allowed the publishers to keep ownership of old characters right when many creatives were asking for them back. Despite the possible controversy, the collection does prove to be the closest you can get to the history of Vertigo without actually being there yourself and will surely be a must-have for any Vertigo-fanatics book shelf. Keep an eye out for it next summer!