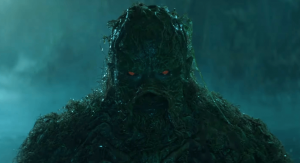 Earlier this week, we learned that production on DC’s live-action Swamp Thing series unexpectedly shut down early, sending ripples of speculation across the internet. To calm those waters, Warner Bros. decided to paint the town green by dropping the first teaser trailer.

In the trailer, we get our first real look at the titular monster (played by Derek Mears) hanging out in his favourite abode. The practical creature suit is definitely a point in the series’ favour—as is the fact that it promises to be scary.

Based on the characters created by Len Wein and Bernie Wrightstson, Swamp Thing is produced by James Wan and written by Mark Verheiden (Ash vs. Evil Dead) and Gary Dauberman (IT). While it was originally intended for a 13-episode run, that has reportedly been slashed down to just 10. The plot will centre around a CDC researcher (played by Crystal Reed) who returns to her childhood home in Lousiana to investigate a deadly swamp-borne virus. But the swamp holds many secrets, and some of them are truly horrifying…

Swamp Thing is set to premiere on May 31st on the DC Universe streaming service. Wade into the teaser trailer below.