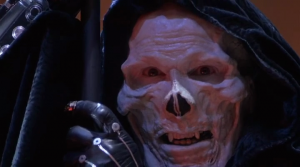 “I’ll be back!” Skeletor promised in the post-credits scene of Cannon’s 1987 live-action adaptation of Masters of the Universe, which never saw that assumed sequel. 30 years later however, his threat becomes real, with last year’s announcement of Sony’s plan to bring the mighty He-Man (played in ‘87 by Dolph Lundgren) back to the screen for a fresh adap of the classic ‘80s cartoon.

The Dark Knight trilogy writer David S. Goyer penned the script and was, a few months back, named as the director. According to Variety however, that no longer remains the case. “The filmmaker and screenwriter has had to drop out because of other commitments,” the site notes, adding that Goyer (whose directorial credits include Blade: Trinity and The Unborn) will remain onboard as an executive producer.

Masters of the Universe began life as a Mattel toy line before being turned into a successful cartoon in 1983. While undeniably silly and cheap-looking, the movie holds a special place in the hearts of many a thirty-something (this one very much included), although it would be good to see something a little punchier this time around.

Sony still plan to release the film on December 18th, 2019, and are currently on the hunt for a new director.