David Prior to Direct The Empty Man 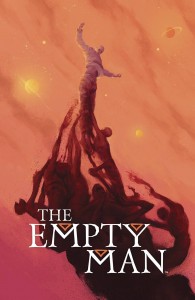 As part of a deal between 20th Century Fox and Boom! Studios, the 2014 graphic novel The Empty Man is making its way to the big screen. Producer David Prior is set to helm the project and he is known for putting together documentary content for directors such as Tim Burton, David Cronenberg and Guillermo del Toro. As he’s worked with such well-known film-makers it’s great to see him getting the chance to craft his own project; let’s see what he’s learnt!

The Empty Man is set in a realistic world where civilisation has broken down due to an outbreak of ‘Empty Man Disease’. The symptoms include hallucinations, aggression, self-mutilation and suicidal tendencies. Lovely. This post-apocalyptic world sounds equally as fascinating as it does terrifying. If the film can match the disturbing, yet brilliant, visuals present in the graphic novel, then we could be in for one hell of a treat with this one.

Fox are already working on adaptations of Hames’s The Malignant Man and a supernatural story from Shannon Watters. Additionally, Imagine Agents will b making its way to film with Michael Keaton in the lead role.

The Empty Man graphic novel has been written by Cullen Bunn and illustrated by Vanesa R. Del Rey.