With David Gordon Green’s Halloween due to hit screens in just over a year, whispers, rumours and predictions as to what we can expect from the film will likely only increase as the months tick by. While Green and co-writer Danny McBride are keeping things pretty close to their chests, we now know that filming is set to kick off sometime around late October/early November. So, y’know, Halloween.

Talking last week, Green revealed:
“We start shooting in six weeks in Charleston, [South Carolina]. I can’t say too much more as we are trying to keep things tight right now, but we are doing something unique. John Carpenter is involved as well, which is like a dream to me. The two films I couldn’t watch growing up were Halloween and Revenge of the Nerds, so I can’t wait to invite my parents to this one.”

Serving as executive producer, Carpenter has been rumoured since the project’s announcement to also be providing the score, although we still await confirmation on this.

Pineapple Express director Green also happily acknowledged the apparent mismatch of himself and Eastbound & Down star McBride to the material:

“I am working with Jason Blum, and he is great. Every horror fan knows Blumhouse and what they represent. The fact that me and Danny wrote it is probably confusing to them, but we’ll keep that in the shadows. That is not going to be a part of how we campaign the movie.” 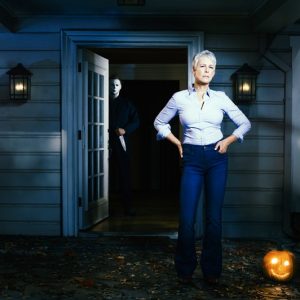 The new Halloween is expected to pick up somewhere after the events of 1981’s Halloween II, while ignoring all subsequent entries in the series. It was announced recently that Jamie Lee Curtis would reprise her role as Laurie Strode one more time for the film. Malek Akkad is producing for Trancas, with Jason Blum producing for Blumhouse. Green and McBride will also executive produce under their Rough House Pictures banner.