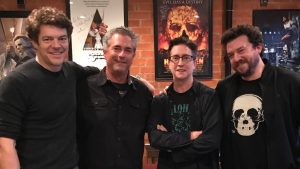 David Gordon Green and Danny McBride talked to Indiewire recently about their upcoming take on Halloween, discussing how they got the gig and the approach they will be taking. Green will direct the new film for Blumhouse, from a script he is co-writing with McBride.

“We can’t talk for too much about the Halloween reboot, but David and I had a long talk with each other about when people do these with movies, where it goes wrong,” McBride told the site. “’What pisses me off when it comes to something I like?’ We all came to the decision that remaking something that already works isn’t a good idea. So we just have a reimagining instead.”

Green talked about the project’s beginnings, and how this dream job landed in his lap, revealing the love for the franchise (and particularly the original film) that no doubt helped win him the directing gig. He also talks about pitching to the great John Carpenter.

“Jason Blum came to me,” he begins. “I’m a huge horror fan, and I’ve never made one. I developed Suspiria for several years with Luca Guadagnino, who’s finishing directing it. It’s going to be incredible. I woke up at a hotel and had this email from Jason that said, ‘Halloween reboot. You get it. What do you say?’ I was just like, ‘What the fuck does this mean?’ I wrote him back and said, ‘Call me immediately; my body is reacting to this’ because Halloween is one of those influential movies that I was never allowed to see and lied about having not seen to my parents for years. It hit all the right taboos, and it had a lore to it. We’re just writing it now.

“The coolest part about that was going to John Carpenter and pitching him. If he didn’t like the take, it wouldn’t bode well. He’s one of my biggest heroes. I think we were just so concerned about getting the job that we didn’t think about how fucking scary that was to go sit down in front of him to tell him how we’d continue the story he’d created. It wasn’t until afterward that I realised, ‘Fuck, this could go so badly. We’ll be really hurt if he schools us right now.’”

Carpenter is onboard to executive produce, and still may provide the film’s score. Malek Akkad (producer on every entry in the franchise since 1995’s The Curse of Michael Myers, including Rob Zombie’s divisive re-imaginings) is producing for Trancas with Jason Blum producing for Blumhouse. Green and McBride will also executive produce under their Rough House Pictures banner.

Halloween is expected to return to the big screen on October 19, 2018.