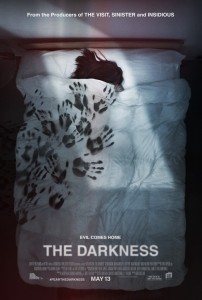 Synopsis:
A vacation to the Grand Canyon ends in a nightmare for the Taylor family when they take home an unwanted souvenir in the form of a violent supernatural force.

I’m starting to wonder if the recent spate of haunted-house films churned out by Blumhouse even have original scripts behind them. Watching their most recent effort, The Darkness, it seems more likely than Generic Ghost Script #6 was selected at random from a pile, the cobwebs brushed off, the pages reshuffled, some star power attached – and then, to trick people into thinking they were getting something different, two darts were thrown at random at a board laden with sticky notes with silly ideas jotted on them in crayon. Kid steals some magic rocks? Ancient Native American curse? Alright, whatever, maybe it’ll bring in a cheap buck.

The Darkness stars Kevin Bacon (Tremors) as Peter Taylor, your usual white-dad-in-horror-movie who lives in the sort of expansive ideal suburban home that all these films take place in. Perhaps ghosts are finicky about interior design, because they always seem to haunt the upper middle class neighbourhoods, don’t they? Anyway, Peter takes his family on vacation to the Grand Canyon… Well, an establishing shot of a guidebook in their car tells us it’s the Grand Canyon, but it looks an awful lot like the Canyon de Chelly, and I may be wrong but I believe Peter even refers to it as that to his neighbour later in the film. Perhaps the family just picked up the wrong guidebook for their trip. Or maybe the filmmakers just didn’t care. They’re only about four hundred miles apart, after all.

Wherever they are, their autistic son Michael (Gotham’s David Mazouz) discovers some strange stones with runes carved on them, which he secretly pockets. Returning home, the family starts to notice some weird goings on around the house – taps turning on by themselves, strange smells, dirty handprints appearing on bedcovers and walls; all the things you’d expect from your average demonic infestation. Michael is acting strangely, becoming unusually aggressive and suddenly talking to an imaginary friend he calls ‘Jenny’, but his parents at first mistake this behaviour as symptomatic of his condition. When the demonic forces start getting violent, though, their minds are quickly changed.

And I do mean quickly. In one jarring scene, mother Bronny (played by Radha Mitchell of the Silent Hill films) tells Peter that she thinks their son’s behaviour could be linked to their marital problems – after all, Peter has a history of cheating, and she is turning to the bottle. Suddenly, with no discernible segue, she is wide-eyed and telling her disbelieving husband that she thinks there might be a supernatural presence in the house. Was a page missing from the script? I mean, she’s not wrong, but that doesn’t make the genre whiplash any more comfortable to sit through.

That’s the real problem at the heart of The Darkness – it’s a cheap horror flick trying on the clothes of an emotional family drama to make itself feel important, but it can’t shoulder the responsibility to handle either with any depth. Peter’s past unfaithfulness is hinted at throughout, but never has a satisfying resolution. Teenage daughter Stephanie (Lucy Fry) is revealed early on to have a serious eating disorder, but the film forgets about that pretty quickly – we’re left to assume she just got over it, I suppose, by the time the happy ending rolls around. And while Michael’s autism is handled with more delicacy than I expected, the interesting angle of the family mistaking spooky happenings for the quirks of a child they are secretly frustrated by is abandoned unceremoniously around the two-thirds mark when the film devolves into repetitive and predictable jump scares and laughably silly special effects.

The backstory of the ghosts themselves is one of the weirder parts of the movie and, with a better script, could have been interesting. Through a lazy scene of Bronny searching the internet and watching a YouTube video (which we are treated to more than once), we learn that the house is being plagued by demons from an ancient Native American culture, the Anasazi, whose spirits were trapped inside the stones Michael stole. They manifest as a wolf, coyote, crow, snake, and bison (I could not tell you which one of these demons was telling the child its name was Jenny, by the way). Regardless of their origin, the naughty spirits are banished by the token psychic character who randomly appears for the lacklustre climax, and the mythology behind them feels more like a gimmick than a genuine attempt to make them interesting.

Speaking of the token psychic, as the film plodded towards its baffling conclusion, I found my mind wandering to the Insidious franchise. Like them or hate them, the Insidious films have a little fun with their silly premises, and the killing off of Lin Shaye’s Elise at the end of the first chapter at least infused the series with a feeling of genuine threat. It was a world in which the characters might actually die… Even if they do find a way to bring Elise back in every sequel. Going into a film like The Darkness, you know there isn’t a chance in hell that any of our bland leads are going to bite the dust, and the whole thing ends up feeling limp and tensionless as a result.

The biggest shock that The Darkness has to offer comes during the end credits, when you realise it was directed and co-written by Greg McLean, the man who brought us gritty and brutal terrors set against the backdrop of the unforgiving Australian outback in Wolf Creek. McLean’s talents are not on show here. Kevin Bacon and a mostly decent cast are stranded in a wasteland of recycled scares and bland dialogue which even the climax’s exorcism can’t shake any life into.

I did not see a single audience member so much as flinch during the screening I attended. Several yawns were heard. The bloke in front of me was checking his phone every five minutes, an act which would usually drive me up the wall. For once, though, I was struggling to avoid doing the same.

Forget mystical rune stones – I was ready to start chucking rocks at the projector to end this boring mess early.