Synopsis:
A couple stumble into a room cluttered with scientific equipment and find a camera. On the tape, a scientist and his assistant attempt to prove his theory that sleep paralysis opens the door to a dimension populated by demons. Meanwhile, three further tales of demons and found footage frights unfold. 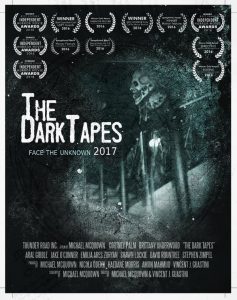 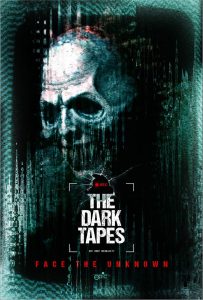 For the first half of The Dark Tapes, it’s difficult to know what we’re in for. Its most generic of found footage titles may set expectations low, but when scientist Martin (Cut! director David Rountree) addresses the camera to explain his theories around sleep paralysis (which involve “trans-dimensional” demons operating on a hugely expanded time scale, accounting for their brief visibility to sufferers of the condition) it becomes clear that something slightly more ambitious is in store. When we then cut to a segment entitled The Hunters & The Hunted however, we are taken into entirely familiar found footage territory. A couple – Karen and David – explore their lavish new dwellings with a video camera but their excitement is short lived when parts of the house begin to produce strange noises and even stranger physical manifestations of unseen forces. The appearance of a blistered, misshapen handprint on David’s back prompts them to call in paranormal investigators, who soon capture footage of the couple’s dead daughter in the house. Familiar? Very much so, but also not ineffective, with sustained dread throughout, before ending with a twist that is both frustratingly silly and entirely unexpected, setting the stage for a horror anthology filled with such contrasts.

We return to the sleep paralysis experiment (the segment is entitled To Catch a Demon, and stars Zombeavers’ Cortney Palm, the most recognisable face here), before moving on to Cam Girls, which is seen entirely through chat windows on a computer screen, and continues to swing the film’s pendulum between genuine horror and amusing fluff. By the climactic moments of this one however, we begin to realise that the film’s sillier moments are more deliberate than first thought. With each subsequent return to the events of To Catch a Demon, this tale too, plays a similar game, and it is in these tonal sways that The Dark Tapes finds its own ground within the over-populated fields of both found footage and horror anthologies. While it could so easily have come across as amateurishly uneven, the film’s tonal bi-polarism only (at least for the most part) makes it more unpredictable, lurching from balled-up tension to wide-eyed laughs at the most unexpected moments.

It serves only to surprise further then, when the final segment before our final visit to To Catch a Demon – Amanda’s Revenge, which tells of a young woman who, after being spiked at a party, is visited and violated nightly by demons who are unaware that their victim is gaining new abilities that will enable her to fight back – is played straight, and is probably the film’s best. Like the rest of the film however, it mixes its own ideas with moments seemingly taken from previous found footage flicks, in this case the likes of Chronicle and Paranormal Activity: The Marked Ones. This is the film’s other main contrast; generic found footage scares mixed with deliberate rule-breaking. While the story of the couple seen at the start and end of the film constitutes the anthology’s wraparound segment, the continuation of To Catch a Demon after each other segment makes it a second wraparound of sorts, further differentiating The Dark Tapes from more traditional anthologies. 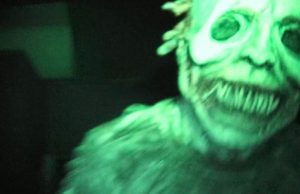 Despite the double-wraparound structure however, the other stories seem somewhat disconnected. It is unclear if the couple whose scenes bookend the film are viewing these tapes on Martin’s camera and if so, why are they on there? They have little-to-no relation to his experiment, and it just feels as though the approach taken by writer-director Michael McQuown (who helmed all segments besides To Catch a Demon), while making for some interesting contrasts and establishing its own set of rules, is not fully realised enough to tie the segments together. It’s hard not to admire his ambition though, and it’s really good to see a found footage anthology marching to the beat of its own drum. With more context given to each segment’s place within the story, and perhaps a change of title, it wouldn’t be unreasonable to think that this one could have become a quiet favourite with anthology fans.