Synopsis:
A man and a woman carry out a ritual in the hope that she will be able to speak with her deceased son. 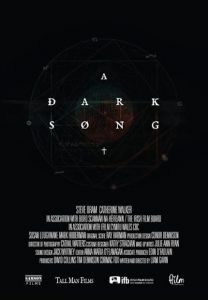 From the above synopsis you may believe that you’ve been there, you’ve seen that and you’ve got the damn t-shirt. However, A Dark Song is unlike any ritualistic horror film you’ve ever seen and embodies a stunning level of confidence and courage as it presents a bold, unforgettable and eerie journey into the occult. This is not a simple film about a Ouija board or a tale about broken families and dead children, this is more than that and it is astounding. A Dark Song is a breath of fresh air in a sub-genre of horror dominated by grieving parents making stupid mistakes and teenagers contacting the dead for a Friday night giggle. This is a light at the end of a dark tunnel filled with predictability and tedium, a promise that contacting the dead can be surprising and courageous, rather than dull and stupid. Held together by two breath-taking performances from Catherine Walker and Steve Oram, A Dark Song is intricate and minimal on the outside, but bursting with refreshing and brave ideas on the inside.

The majority of the film follows Sophia (Walker) and Joseph (Oram) as they carry out a complicated ritual inside a large, empty house where, in the end, they should be greeted by an angel that will grant them both one thing they desire. This concept alone is a bold one as it is and paves the way for a few spectacular scenes of beauty and otherworldliness. Of course, these scenes of wonder are coupled with those that are more terrifying, because when you’re venturing into a world of angels, you have to cross paths with a few demons. Despite their horror, the scenes of misery are, too, captured beautifully. A Dark Song lives up to its name, becoming a gorgeous lullaby of cinematography interlaced with an eerie atmosphere dripping with dread.

The boldness of A Dark Song’s potential promise of an angelic finale is enough to maintain your interest until the end. It also allows you to believe in Joseph’s unbelievable tasks for Sophia; she’s going to meet an angel for goodness sake, yes she can do without a bit of sleep. We know that Sophia wants to speak to her deceased son, but Joseph’s want is a mystery. He is an occultist that has carried out successful rituals like this before; he guides Sophia round the house, where every room is marked with various symbols and the idea of venturing into five circles is the key to the ritual’s success. It is mandatory for Sophia to be as pure as possible, so she must also refrain from sex, food and water prior to the ritual and various times throughout. The ritual takes many months and at no point can either venture from the house; not for food or emergencies, for fear that they will be trapped in the house forever. It’s complicated and utterly mad, but entirely enthralling thanks to the film’s confidence in its execution. 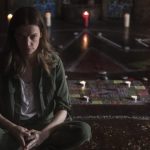 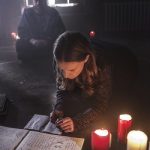 The script is woven perfectly for Oram and Walker to portray their contrasting characters. Sophia is a middle-class, uptight woman who is desperate to speak to her son and willing to do anything – and spend £80,000 – to do so. She becomes frustrated when after many weeks there is no sign of success and no proof that the ritual is working, taking her anger out on Joseph who, quite frankly takes none of it. Joseph is a bit of a bastard. The complete opposite of how you’d traditionally picture an occultist; he’s a brash bully, forcing Sophia to do unthinkable things with the promise that her son will be at the end of it. He smashes plates in anger and calls Sophia every name under the sun, but there’s no denying his intelligence and familiarity with demons, gods and angels. The relationship between these two people holds the film together and persuades the audience of the reality that lies within this unreal chain of events. Walker wonderfully channels a mother’s desperation and longing to create a character that is easy to empathise with and Oram’s Joseph fast becomes a welcome splinter in her depression, ironically bringing her down to earth when all he means to do is persuade her of otherworldly potentials. Never has it been so easy to believe in angels and demons than here.

To speak much more about A Dark Song would be a crime, because it’s best going in knowing you’re going to be greeted by something special and nothing more. It’s stunning and astounding, equally as terrifying as it is beautiful as it manages to walk the tight rope between horror and grace so elegantly and confidently. A true gem and a must-watch, A Dark Song is a remarkable horror film.