Dark Horse to Release an Illustrated Biography of Yoshitaka Amano 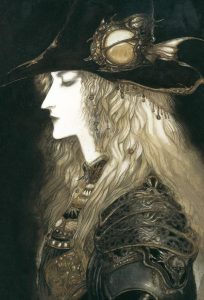 For anyone who has ever been involved in the worlds of gaming or fantasy, the name Yoshitaka Amano is no stranger and for those who haven’t been, would be surprised how much influence this man has had on popular subculture, including horror. Credited for the artwork behind Final Fantasy, Vampire Hunter D, Demon City Shinjuku, and more art books than you can shake a stick at, Amano is a man who has worked tirelessly for over 50 years on helping push illustration to where it is today. Thanks to Dark Horse, Amano has finally received his due praise in a 327 page tome of artwork and photographs, though of course, for all the hardcore fans, there will be a limited edition versions that blow your heads off.

Titled Yoshitaka Amano: The Illustrated Biography – Beyond Fantasy, the regular edition promises over 400 illustrations and photographs along with a deep biography of Amano’s professional life. This will include influences, early work, paintings, philosophy, and his family that has supported him throughout his illustrious career. The limited edition will feature everything the regular edition plus so much more! A black slipcase protects an alternate book cover presenting the traditional Japanese lacquer hues black, gold, and red and will include his Paris sketchbook that features studies of the city’s residents. Also included will be a 3-hour DVD of Amano in the City of Lights as he shops for supplies, does a live draw in his studio, and shows his technique as he draws a Vampire Hunter D piece from start to finish. A mini-lithograph of that painting along with a Final Fantasy illustration will be slipped into the collectors series as well and, if that’s just not enough for you, a signed card by the man himself. Whew, that is a lot of Amano!

While the limited edition comes with a ton of extra good-stuff, is a bit more on the pricey side at sturdy $150 USD vs. the regular editions $50 USD. If it’s all worth come clearly down to the collector, but short of including the man himself, Dark Horse has really gone all out! Never before has such a momentous and dedicated collected book of his work been done and with it being hemmed by one of France’s leading video game historians, it will definitely deliver on what it promises. Even Neil Gaiman, who has previously collaborated with Amano on a Sandman work, cannot praise this man enough: 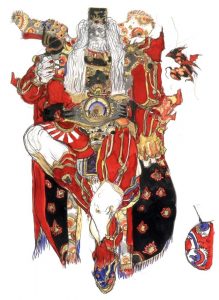 “Amano is an artist for the next century…He has taken all that he has learned from anime, from American comics, from a hundred traditions, and he moves forward with it, scaling the wall between fine art and illustration, between East and West, between yesterday and tomorrow. Amano is a storyteller. His paintings are stories. His mind is magic: and here he gives us a kaleidoscope of images to take us into the future, to teach us about our past.”

Both editions will be out October 10th and are already available for pre-order!