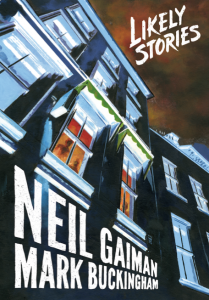 It seems like Dark Horse’s love affair with all things Neil Gaiman is far from cooling off. Following in the footsteps of their other successful Gaiman short-story adaptions, most recently Forbidden Brides and It’s Only the End of the World, Dark Horse will be releasing their fifth hardcover of the bard’s book work titled Likely Stories. The series will be handled by longtime collaborator and friend Mark Buckingham who is most famously known for his art run on DC’s Fables.

The collection will adapt four short stories each of varying menace, magic, and overall creepiness. The stories included are: “Feeders and Eaters” about an old lady who consists solely on raw meat, “Foreign Parts” that tells the tale of man suffering from a strange venereal disease, “Looking for the Girl” focuses on a photographer looking for an immortal pin-up model, and “Closing Time” which is perplexingly described as a ‘ghost story within a ghost story.’ Each of these short stories have been printed before but Likely Stories will be the first graphic adaption to grace their creation. Buckingham is also planning to interweave each story into the other ones in hopes of creating a cohesive comic instead of a four, stand-alone stories.

Buckingham describes his delight to once again be working with Gaiman in an official Dark Horse press release:
“Having been friends and collaborators for over thirty years, Neil Gaiman and I have worked together in a variety of different ways, from illustrating his full scripts, to our current cowriting of new Miracleman stories. However, I had never adapted any of Neil’s prose stories before, so this was an irresistible challenge,” said Buckingham. “Not all of these stories were new to me. Feeders and Eaters started life as a comic strip Neil and I created for a UK publisher way back in 1990. When Neil revisited it as a prose story a few years later he added a lot of depth and richness, which opened up new narrative possibilities. Ever since then I have been eager to take another shot at it myself. So imagine my delight when Dark Horse approached me to do just that as part of the Likely Stories collection!” 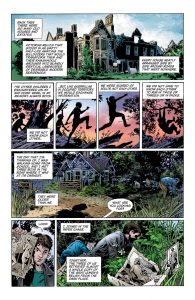 When asked what fans can expect from the collection, Buckingham said:
“I love the fantastical and the strange, especially those unsettling things that lurk in the periphery of your vision. The things you can ignore in the hustle and bustle of daytime or curled up in comfy armchair of a well lit and cozy home. Other people’s worlds. Other people’s stories. Things that, when moved to a darkened after-hours bar, when you’ve missed the last bus home, and find yourself talking to a stranger whose words are dragging you deeper and deeper into their personal hell become the thing of nightmares. That’s where Neil and I take you in the Likely Stories.”

Likely Stories is scheduled to be out at comic stores Aug. 29 and bookstores Sept. 11. If you’re interested in more Gaiman/Buckingham collaboration but don’t want to wait for Likely Stories, check out their other work Miracleman available everywhere fine comic books are sold.