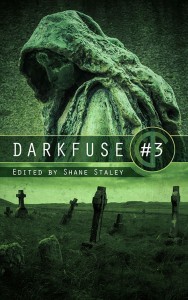 The third edition of the Darkfuse anthology series is out and there’s a big difference this time, namely that I haven’t heard of any of the 6 authors that have contributed. Superbly edited by the Darkfuse commander in chief Shane Staley we have 6 riveting tales of terror.

First up is Ritual by Lauren Gallo in which Sara and her Mother travel to Japan for Grandmother’s funeral, tensions rise and soon Sara realizes that she is here for an entirely different reason. Her family still hold to ancient traditions, the old ways are honoured and those who remember prosper, and she will never forget.

Chanterelling by Nicole Feldringer sees John and Shelley out at his grandfather’s cabin. His Grandfather fostered children and a tainted history is soon apparent, things happened in this forest and ghosts are vengeful.

To Get Past It by Tim W. Burke tells the tale of Glenn who comes home one day to find a man sitting on his front step. The man tells of his past, a memory from his childhood resurfaces and is this all about revenge, where’s his daughter?

The Matchbox Sign by Evan Dicken sees Wyatt just getting over the death of his mother, shortly followed by a descent to insanity with the unwanted assistance of a plague of bedbugs.

Next up is Taking it All Away by L. R. Bonehill and Jack is nursing his Father through his last days when he sees something, a presence associated with death but who does it seek.

Finally, Winning Isn’t Everything by William R.A.D. Funk is a tale of gambling, winning or not winning as the case maybe, what would you give to win? Would you sacrifice it all? What if you had no choice?

Some really good short sharp stories of dark fiction and horror in this collection, if I had to name a favourite it would be Chanterelling closely followed by Winning Isn’t Everything.