Danny Trejo to Bring Home the Bacon in Bullets of Justice

Add Danny Trejo (Machete) to a movie and you know you’re in for a good time. But what happens if you throw human-pig hybrids into the mix? We’re about to find out in upcoming action-horror film Bullets of Justice. 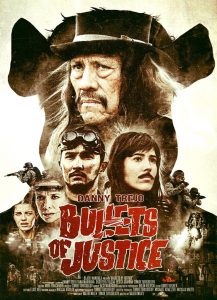 The film, which started life as a crowdfunded TV pilot, follows ex-bounty-hunter-turned-resistance-leader Rob Justice (Timur Turisbekov) in his attempts to destroy the “Muzzles.” These pigmen are the result of project “Army Bacon,” the American government’s attempt to breed super soldiers during World War III. Now the Muzzles are at the top of the food chain, breeding people for meat, and the last surviving members of the human resistance have fled underground to avoid becoming dinner.

Trejo plays Grave-digger, and although an earlier trailer makes it seem like his appearance might be short lived, we’re still excited to see him kick some curly-tailed ass. Doroteya Toleva also stars, alongside Yana Marinova and Dessy Slavova (both of whom are known for their stunts). The film is directed by Valeri Milev, who also helmed the woeful Wrong Turn 6: Last Resort, but we won’t hold that against him if Bullets of Justice delivers on the pure B-movie fun it promises.

Will it make us squeal? We hope so. Take a peek at the official teaser below, and let us know if you’re hungry for Justice!