Becoming a parent allowed me not only to rekindle my inner child, but to also revisit TV shows and films with my kids that I hadn’t seen in ages. It was great to get the chance to do so, but at the same time it quickly became clear that as much as my kids enjoy watching new productions, nowhere near as many recent releases kindled as much excitement in them as the content I was raised on in the ‘70s and ’80s.

One particular favourite of mine back then was “The Banana Splits Adventure Hour” (reruns – I’m not that old) and one of the last things I could have ever expected was an R-rated feature film in which Fleegle, Bingo, Drooper and Snorky turn murderous upon learning of the cancellation of their show.

Having now seen the film, despite my fond childhood memories of the original TV show now ruined forever, it’s an explosion of bloody fun and replacing the joy and laughter with mayhem and murder works wonderfully well. To celebrate the release of the film in the UK this week, SCREAM spoke with director Danishka Esterhazy (Level 16) all about reforming the cult-favourite animal rock-band for both Gen X and Gen Z audiences Tra-La-Lalike…

SCREAM: First of all, I wanted to thank you for just spoiling my childhood, but I have to admit that it really is all kinds of fun and not just for those of us who grew up with the original show.

Danishka Esterhazy: Oh yes. I’m here to ruin childhoods (laughs). But to be honest, I hadn’t actually watched “The Banana Splits” show – not as a child anyway – so it was all new to me. When they told me about the project I dove into a deep hole of research watching the original series from `68 and `69. It was definitely eye-opening.

Not knowing anything about the original show, and with your previous film being quite a far cry from this one, how did you end up directing Fleegle, Bingo, Drooper and Snorky?

I was actually having a casual meeting with Josh Van Houdt from SYFY in Los Angeles. We were literally just talking about projects and we’d been wanting to work together for a while. Josh had loved Level 16 and he wanted to introduce me to the people at Warner Bros. and he just happened to mention that they were looking for a director for this Banana Splits project. Once I read the outline for it I was actually really excited and so I chased them down and tried to convince them that I’d be a good fit because I really love telling genre stories that have a lot of depth to them. I love to tell stories that have something interesting to say about the characters, about the families, gender, politics and about the world. On the surface, The Banana Splits is just a really crazy, dark horror story that uses nostalgia to bring out a sense of dread and fear but it’s really an interesting story about family and about people learning to accept who they really are.

And were all these themes in the original script or did you inject more of those themes into the film once you came on board as the director?

The core and the heart were definitely there. Scott [Thomas] and Jed [Elinoff] are amazing writers and their terror scenes are so beautifully constructed on the page so it was very easy to direct them. Having said that, I became attached at the outline stage when they knew the tone of the story and that it was going to be a horror movie with a strong female protagonist. The only one main change that I requested was that there was a gender swap between the two child characters, Harley and Zoe. They had already created a character who was a little girl who was very dreamy and sweet and childlike with an amazing imagination and she was misunderstood by the people around her. I loved that story about a little outsider but I thought it would be an even more interesting story if it was a little boy who had these characteristics and who didn’t quite conform to people’s expectations as to what a little boy should be like. And to make that even more fun I thought it would be great if his friend Zoe was a little girl who doesn’t really fit the stereotype of what a little girl should be. That really interested me and the writers got really interested by that and that’s the direction we took.

Talking of the writers, both Jed and Scott have a Hanna Barbera background, both having worked on shows like “Scooby-Doo.”

They were the perfect fit because of their experience in the world of children’s television. At the same time, they’ve also written a lot of dark thrillers. Scott actually had a really great dark thriller novel that came out last year that is quite an incredible read so they had the skills to go to those really dark places but they have a really authentic understanding of some of the funnier elements that happen in children’s television.

You’ve mentioned some of the deeper themes that were important for you but what specific nostalgia elements did you think were important in order to pay homage to the original show?

I know Scott and Jed tried to celebrate some of the sets and elements of the characters. They really tried to differentiate each of the characters, creating the world of Snorky’s circus and Bingo’s jungle and there’s the mailbox which is an Easter Egg for people who remember the mailbox gags from the original show. I think they tried to bring as many elements of nostalgia from the original show as they could and then I tried to complement that with some of the production design and the cinematography to give a nod to the colour palettes and some of the styles of the 1970s. Even though it’s set in the modern world, I told the crew to imagine that it’s the modern world haunted by the 1970s and we can’t really escape it. It’s in every room, every costume and every scene. Everything evokes that specific time period. 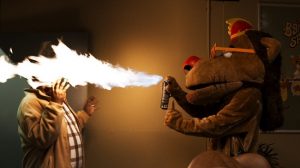 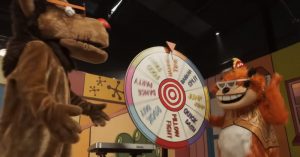 It’s funny you say that because Fleegle, Bingo, Drooper and Snorky look and sound exactly as they did back then but it’s quite eye-opening how downright creepy they are today.

Absolutely. We had the wonderful Eric Bauza come in and do the voices and he’s just a genius in terms of animated voice-overs. He was able to match those characters so well. It was actually funny because we had temporary voices when we were shooting and we waited until the very end of post-production to bring Eric in to do the voices. When I first heard him do Fleegle, I was so thrilled because it was exactly how I had been imagining it in my head the whole time and he really nailed it.

We must talk about the kills here because the world is quite literally your oyster here in that, whilst it’s set in the real world, everything has a very cartoony feel to it, especially when it comes to the more violent set pieces.

One of the challenges when you’re making horror is that you want to bring fresh and original scenes to the big horror sequences. Horror fans watch a lot of films and you don’t want to bring a repeat of something they’ve seen in other films. And, like you say, there was a great opportunity here because there haven’t really been a lot of films set in a children’s world so we really embraced taking the elements and props from the children’s television world to create the horror and to create those scenes. I think the writers did a great job writing those scenes and I loved shooting all those kill sequences. They were challenging and fun and just so exciting to put together.

Curiously, in a market full of so many reboots and remakes and so many films and TV shows that exploit our nostalgia, this film shares that same element of nostalgia but at the same time The Banana Splits turn murderous because their show gets cancelled as people see it as old hat. Was there something you, or the other writers, were trying to get off your chests there?

Funnily, we joked quite a bit about how they have such cruel portrayals of the studio executives but all the executives who read the script really loved all those parts. In a way we’re just sending up the whole concept of Hollywood and children’s television and network development. Ultimately, it’s just a pretty kind in-joke from people who work in the industry.

And then, in terms of reboots, when I started out as a filmmaker, I made a lot of short films that were inspired by fairy tales. One of the things I really loved about retelling a fairy tale was that you can start with characters in a world that people think that they understand and then you take them on a journey where you turn everything upside down to say something interesting. For me, that is a wonderful way to tell a story so The Banana Splits is, in a way, like retelling Little Red Riding Hood or Cinderella. It’s something that is familiar but we can take it in a completely different direction which will hopefully surprise and entertain people and ultimately get them thinking more than they might have expected…

Be sure to pick up The Banana Splits on Digital Download, DVD and Blu-ray which tra-la-lands in the UK this week.