Dani Filth Talks Hammer Of The Witches & Cradle Of Fear 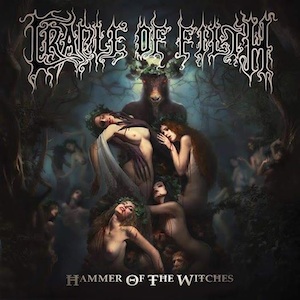 Hammer of the Witches will be their 11th album to be released and will be available from July 10th. You can pre-order the album here:

Zoe Rose Smith caught up with Dani to speak about the new album, his role in the cult classic Cradle of Fear and a possible revival, along with his cherished and most despised horror films…

SCREAM: So your new album Hammer of the Witches is due out mid-July. Can you describe the influence from the Malleus Maleficarum book?

Dani Filth: Well the album isn’t a concept album as such, but we did take the title from that. It translates as Hammer of Witches, which was like a treatise that sat on Magistrate’s tables about how to discover witchcraft and the elements of witchcraft. It was a guidebook I suppose, for the prosecution, seeking out and persecution of witches. Bearing in mind the majority of it is utter bollocks, it was a very powerful and evil tool that sent thousands upon thousands, of mainly women, to death as it was very misogynistic in the fact that it considered witches being more feminine than male and were apparently the weaker of mind and spirit, all lustful etc, sort of useful crap that they came up with. Our definition of the title was more about the power being in the witch’s hands. Hammer of the Witches is actually about retribution, comeuppance and punishment for years of persecution. 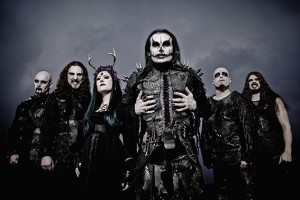 How have horror films influenced the music that you and your band create in Cradle of Filth?

Well I think I started on the road to the occult when I was a kid as I was always into dinosaurs and monsters, which led to me being a fan of all the universal horror films. We used to have a monster movie on Thursday evenings about 6 o’clock on BBC 2, Godzilla movies, Creature of Boggy Creek and that sort of thing. Then I think it all changed for me with Michael Jackson’s Thriller because the director of that obviously, John Landis, had done American Werewolf in London and I think everybody hired out the making of Thriller and I saw that and just fell in love with it. So yeah, my Dad hired me a VHS and it was probably the biggest scare of my life, as a kid I didn’t see the black humour in it, for me it was just fucking frightening from start to finish. He went out to pick my Mum up and I think my sister was at girl guides and my brother was out, so long story short I was there on my own watching it and it terrified me. When they got back, it was winter, dark, 8 o’clock at night, my Dad started going round the side of the house scratching the windows and I shat myself and I loved it.

You starred in the cult horror film Cradle of Fear about 14 years ago now. What was it like playing the killer?

I didn’t know I was in a movie *laughs*. You know what, it was great fun because there were a lot of people that were great to work with on that movie, a lot of friends as well, so it was a real party atmosphere from start to finish. The whole premise was meant to be like an Amicus movie, like different tiers, they’re called portmanteau.

Obviously Cradle of Fear was loved by many horror film fans and Cradle of Filth fans; the question from not only me, but a lot of people is there ever going to be a possibility of a sequel?

Just to put any movie out there really, we’re talking two – three million pounds and that’s a lot of money, especially to the average Joe. To the film industry, that’s just an interim budget for a few weeks and because you have to raise money, you need to have investors and investors started getting itchy and they start dictating how the film should go. That’s why Hellraiser never really, I mean they’re talking about it now about 20 years on, it’s gone through so many re-writes, different people, involved one minute and then they don’t want Bradley being in it and everyone’s like fuck that we’re not going to watch it. But yeah, I would love to and I have talked about different ideas, but I haven’t spoken to Alex for years, we just grew apart, he got busy doing other things and that was another reason we didn’t immediately do something else. I would love to; I’ve got loads of great ideas. 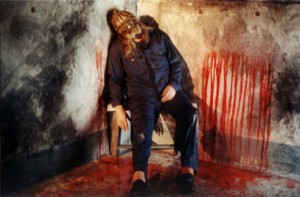 You’re a big horror fan, so what’s your best and worst horror films of all time?

You know what, I can’t answer that! I’m a massive fan of all different genres; I like everything from the 70s and 80s gore stuff to the modern gore stuff. Modern horror has a lot of psychological stuff, which is cool. I’m massive fan of Coppola’s Dracula, even if you ignore Keanu Reeves as Jonathan Harker, who was bloody awful, he looked like he’d stepped straight out of Bill and Ted for that one. I love nineteenth century horror and I love when it’s done with an adult context, looks fabulous, costumes are great and it’s really decadent, but I also love that it has blood and guts and teeth to it.

What film do you hate that everybody else you know loves?

Blair Witch. My sister is very witty, a lot wittier than I am and has her head screwed on and she said when she saw it she just wanted to join the back of the queue and watch it again. I eventually went to see it at a movie theatre in Ipswich and I thought it was the biggest pile of shit I’ve ever seen in my life. The woman, about three minutes into the film I wanted to kill her myself. Literally at the end of it, I went “Is that it?!” is this what people have been raving about? It was pathetic and I still think it’s pathetic to this day. I can’t expel how much hatred I have for that film. 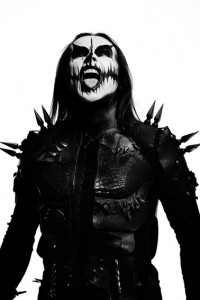 What upcoming films are you looking forward to this year?

Crimson Peak because I love Guillermo Del Toro. I do like the superhero franchise, I love the Avengers and how gritty and down-to-earth it is, rather than being all about neon costumes. I know Suicide Squad isn’t this year but it looks awesome and Margot Robbie looks fucking fantastic. As for horror films, I’m just waiting for them to do something with Hellraiser and with Doug Bradley because he’s so good.

Thank you for speaking to SCREAM, Dani.

Thank you. An honour, truly.